We use cookies to provide you with the services at our best. By continuing to browse the website, you accept it. More.
Need a perfect paper? Place your first order and save 5% with this code:   SAVE5NOW
Home › Social Sciences › Quantitative Data Analysis and Report Writing

Social anxiety leads to the fear of situations that occur in public. One believes they are perceived or acts in ways leading to humiliation. Common concerns include coming across as incompetent or dull, sweating, blushing, shaking, or anxious. However, these concerns are disproportionate to the expected outcome (Bystritsky et al., 2013). Ultimately these individuals dread encounters with other people leading to social withdrawal and social interactions. A range of severity characterizes social anxiety, like many psychological challenges. For starters, it is the evolutionary prompt of how one looks or appears before others. On the extreme, it becomes a highly debilitating clinical disorder resulting in specific cognitions and behaviors.

The social role theory and the schema theory propose that women and men experience social anxiety differently. Hence, there is a need for research in gender differences. For instance, the cognitive-behavioral model of problematic Internet use (PIU) proposes that social anxiety is associated with specific behaviors and cognitions on the internet (Yu et al., 2016). Hence, the research objective can be narrowed down to the relationship between PIU represented by happiness and social anxiety. Besides, there is no adequate research on multidimensional problematic Internet use and social anxiety levels. The hypotheses are tailored to explore the gender difference among the social anxiety group. Secondly, the data analysis examines the relationship between resilience, happiness, and fear.

The research problem (PIU) is described as unhealthy internet consequences such as distraction, impulse control, depression, social comfort, addiction, and social benefits. Despite the similarities with internet addiction, PIU does not necessarily contain all internet addiction symptoms. The associations between psychological impairments and PIU are supported by the PIU cognitive-behavioral model (Gámez-Guadix et al., 2015). The displacement hypothesis states that internet use is critical since it eats up time spent in real-life interactions. Hence, leading to psychological problems as one engages less in real-life interactions. Further, students who are socially more anxious and lonely tend to use the internet as a solution.

The internet is available for individuals who want to gratify their needs, interact with others, and conveniently disclose their inner selves. Hypothetically, these individuals are considered unhappy with their current real-life situations. Hence, they try to create an environment where they feel more comfortable and unwanted. However, the use of the internet leads to different types of problems. Therefore, the research uses the Subjective Happiness Scale [SH] (Lyubomirsky & Lepper, 1999]) to measure the level of happiness.

Social anxiety is a social menace increasing at a fast rate, especially among students. Resilience factors are vital in dealing with social anxiety. However, a limited understanding of the resilience impact on social anxiety exists. There exist two significant types of resilience, namely social-ecological and psychological. In a study by Jefferies et al. (2021) from 5,880 young people (SD = 3.95 M= 22 years), they found that social anxiety is negatively correlated to psychological resilience. On the other hand, the impact of social-ecological strength is less consistent among the seven different countries in which the study was carried in (Vietnam, US, Thailand, Russia, Indonesia, China, and Brazil). In this paper, the Brief Resilience Scale (BRS) is used to measure the resilience level among the participants.

Null hypothesis 2: Happiness and social anxiety have no relationship.

Alternate hypothesis 2: Happiness and social anxiety have a relationship.

Null hypothesis 3: Resilience and social anxiety have no relationship.

Alternate hypothesis 3: Resilience and social anxiety have no relationship.

Null hypothesis 4: Social anxiety, happiness, and resilience cannot be used to explain the social anxiety level of a specific gender.

Alternate hypothesis 4: Society anxiety, happiness, and resilience can be used to explain the social anxiety level of a specific gender.

The research is quantitative and uses secondary data collected by a psychologist working in mental health. The participants are 53 undergraduate students, of whom 41.17 % are men and 52.38% are women, as indicated in the appendix 3 pie chart. The data collection was through a survey where the participants’ resilience was measured using the Brief Resilience Scale (BRS). The happiness level was measured using the Subjective Happiness Scale (SHS) and Brief Fear of Negative Evaluation Scale (BFNE) to measure social anxiety. Higher scores BRS (1-5), SHS (4-28), and BFNE (12-60) indicate higher scores of resilience, happiness, and social anxiety, respectively. Those who scored a 25 and above overall score have a significant social concern. The data analysis techniques include the T-test, Chi-square, and correlation.

The third hypothesis is on resilience and social anxiety, measured using correlation. The results of appendix 9, which indicate the kurtosis and skewness and those of the histogram in appendix 10 showing the uniform distribution, pass the data as parametric. Hence, Pearson correlation is used to determine the relationship between the two variables. The histogram on resilience and social anxiety indicates the two variables have a negative and weak relationship. The results of the correlation matrix fail to reject the null hypothesis with a score of 0.65 (p> 0.05). Hence, the relationship between social anxiety and resilience has no statistical significance.

The descriptive statistics indicate that males scored higher than females in the social anxiety levels. Further, the independent t-test shows the results are statistically significant; hence, the null hypothesis is rejected. Generally, studies have shown that women suffer from social anxiety than men (Balogu et al., 2018). However, the characteristics of the current population, culture and contemporary era have changed this perspective, as found out by Balogu et al. (2008). The findings of the data analysis support this change. This is maybe due to the shift in gender roles whereby they are almost the same in this contemporary era. Besides, the educational opportunities for women have closed the gap in social anxiety as women are becoming more active in society. However, there is still a need for further research and studies on men’s statistical significance with higher anxiety levels.

The second hypothesis tests the significant relationship between happiness and social anxiety. The happiness variable is used to measure the PIU of the students. For instance, men’s social components are related to social benefit problems. Women, on the other hand, have adverse use problems. A man with high social anxiety has a higher likelihood of using the internet for social support. Besides, more social problems will arise from excessive internet use. The scatter plot indicates a strong relationship between social anxiety and happiness. However, the Pearson correlation did not find any statistical significance. The third hypothesis tests the significant relationship between resilience and social anxiety. The Pearson correlation results indicate no statistical relations between the two variables despite the scatter plot showing a weak and positive relationship. The four hypotheses test how one can predict the anxiety score of a particular gender from the cumulative score of happiness, social anxiety, and resilience. The results were statistically significant; hence, the conclusion that the three variables can predict the social anxiety scores of an individual. The limitation of the findings is that the data used is from a non-clinical sample. Therefore, the results can only be generalized to a population of the same characteristics. Also, there might be common method bias as the survey relied on self-report measures. Further studies are needed to provide dynamic models to predict social anxiety without reliance on sex-related factors and cultural nuances. 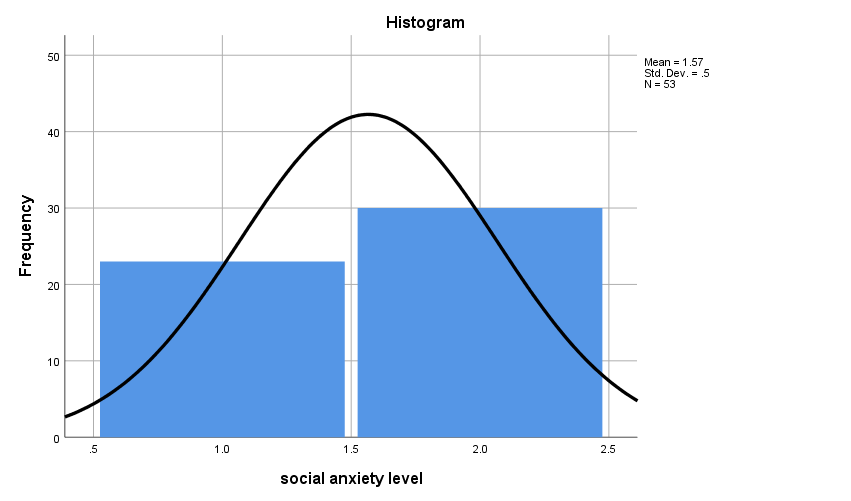 Appendix 3: Pie chart on Gender of the Participants 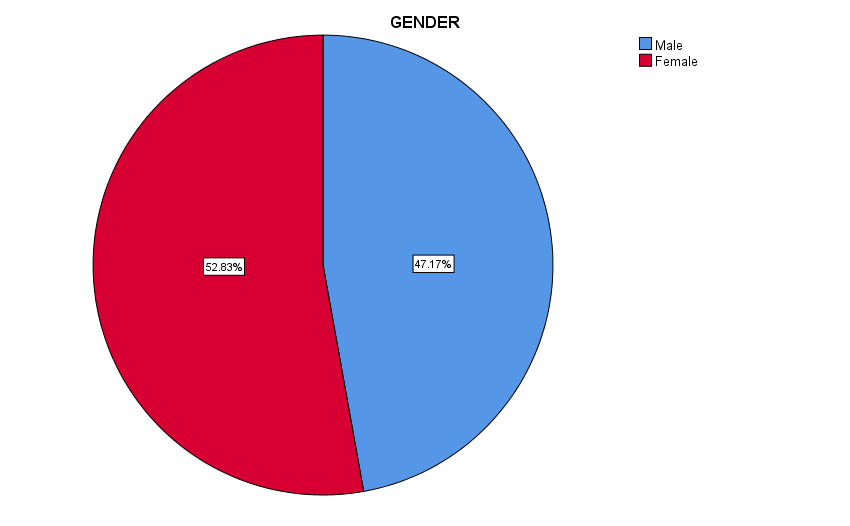 Appendix 5: Statistics for BFNE and SHS

Appendix 6: Histograms for BFNE and SHS 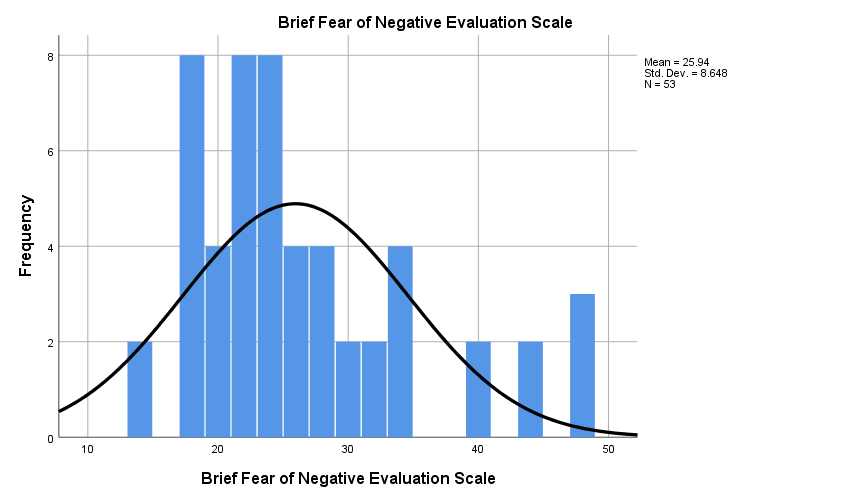 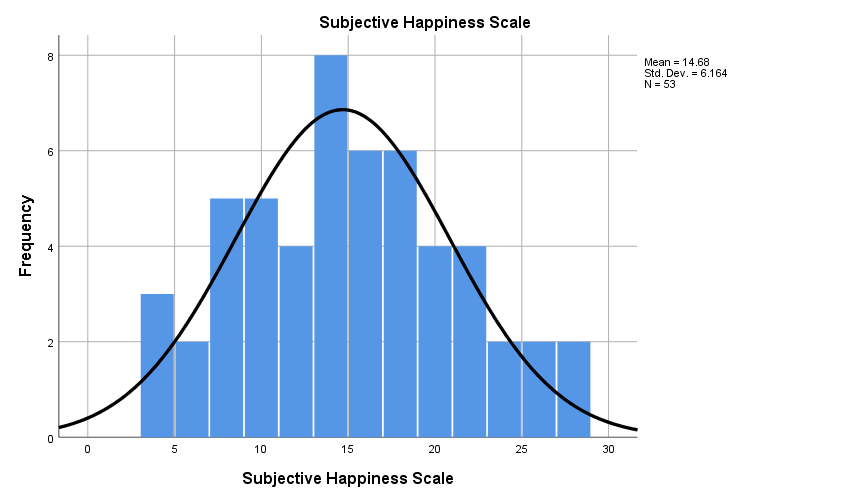 Appendix 7: Scatterplot for BFNE and SHS 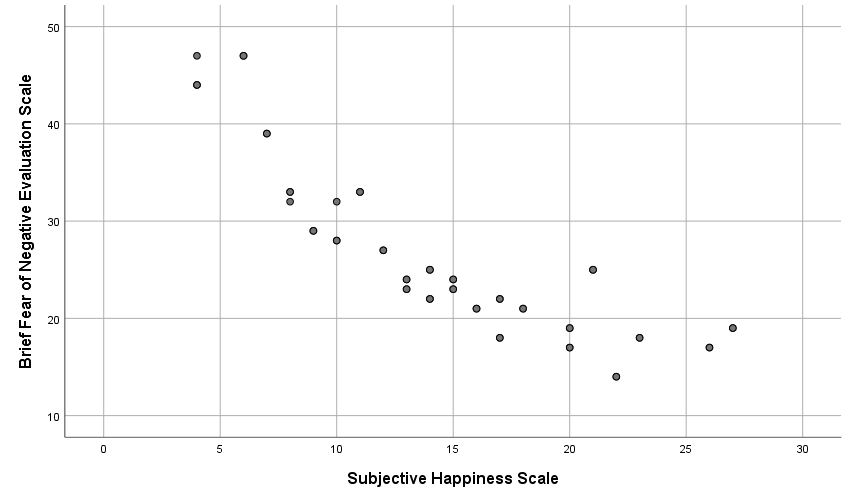 Appendix 9: Statistics for BFNE and BRS

Appendix 10: Histograms for BFNE and BRS 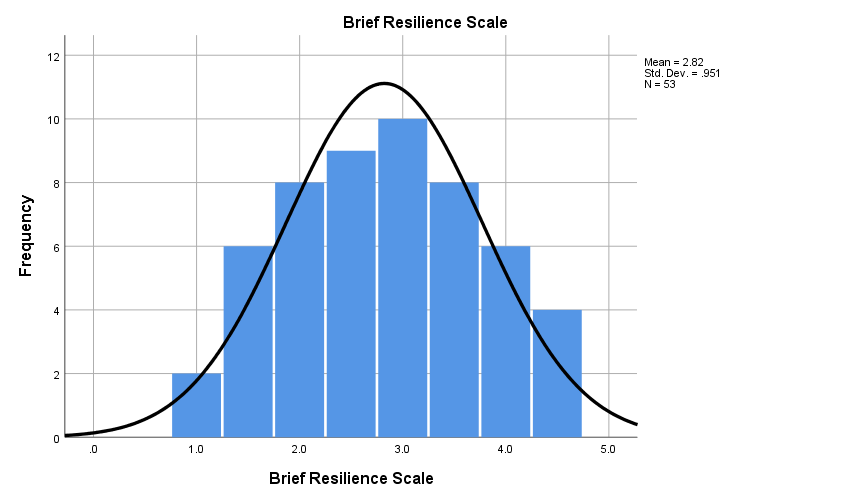 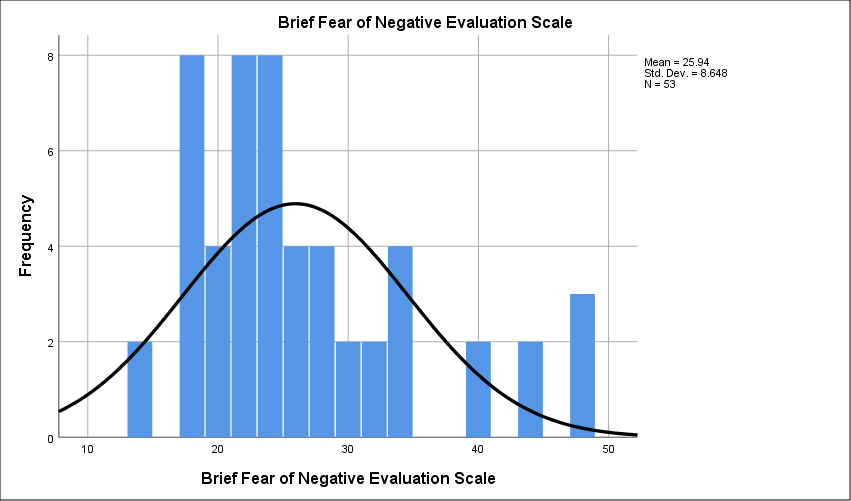 Appendix 11: Scatterplot for BFNE and SHS 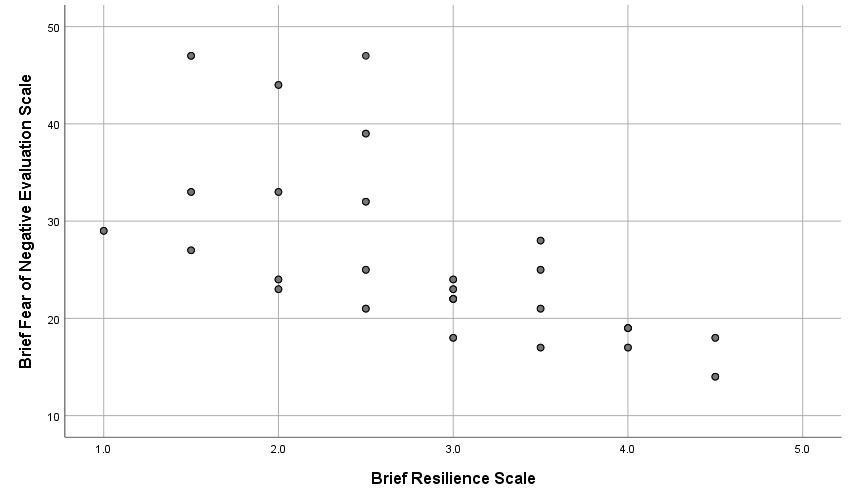 Want an essay on the same topic?
Order an essay from our professional writers and get an essay written from scratch in just 3 hours. We work only with the best academic writers.
Place an order
Related Topics
Psychology
BRS
Brief Resilience Scale
Quantitative Data Analysis
Report Writing

Introduction For decades, the question of whether democracy and Islam are compatible has lingered. Numerous western and Islamic intellectuals have conducted extensive research and published their views on whether or not Islam is compatible with democracy. However, the situation remained unresolved for the time being. Numerous experts believe that democracy and Islam should have had ... END_OF_DOCUMENT_TOKEN_TO_BE_REPLACED
Pages: 6       Words: 1576
View Sample

Advantages and Disadvantages of Homeschooling

Varying lengths of radical change define the present society. For example, brick-and-mortar classrooms, which have for the longest time dominated learning, are now being challenged by unconventional learning methods such as homeschooling. However, part of the problem with homeschooling is that it faces financial constraints. It also limits the children’s level of socialization and requires ... END_OF_DOCUMENT_TOKEN_TO_BE_REPLACED
Pages: 4       Words: 906
View Sample

Laws Influencing Information Security and Privacy in the Education Sector

Introduction In 2020 and 2021, when institutions started migrating to digital systems to battle the pandemic, many new risks surfaced. Hackers have traditionally seen schools as soft targets because of the wealth of personal information they store on students, faculty, and staff. This is why universities and colleges are the exclusive victims of 75% of ... END_OF_DOCUMENT_TOKEN_TO_BE_REPLACED
Pages: 6       Words: 1583
View Sample

Introduction The book Modernity at Large examines various elements that lead to cultural and societal developments worldwide. These factors are crucial in ensuring that the world develops in various ways to improve the quality of living among people. Anthropologist Arjun Appadurai explains five critical flows that lead to globalization and development across various cultures. Three ... END_OF_DOCUMENT_TOKEN_TO_BE_REPLACED
Pages: 3       Words: 758
View Sample

In the Manitoba case, the unilingual enactments of its legislature vary from section 23 of the Manitoba act because the needed form and manner of their enactment as per the constitution has not been adhered to. Consequently, they are of no effect or force and thus invalid. Since 1890 this legislature passed approximately all its ... END_OF_DOCUMENT_TOKEN_TO_BE_REPLACED
Pages: 4       Words: 1072
View Sample
Need a plagiarism free essay written by an educator?
Order it today