We use cookies to provide you with the services at our best. By continuing to browse the website, you accept it. More.
Need a perfect paper? Place your first order and save 5% with this code:   SAVE5NOW
Home › Science › Data Plotting and Information Analysis

According to the data supplied in our graph, the top five cities for infected cases were Houston, Texas, with 272 infected cases; Austin, Texas, with 281 infected cases; Phoenix, Arizona, with 289 infected cases; and Jacksonville, Florida, with 322 infected cases. Prevalence rates for each of these cities would be.0032 or.3 percent for Jacksonville,.0029 or.29 percent for Miami,.0029 or.29 percent for Phoenix,.0028 or.28 percent for Austin, and.0027 or.27 percent for Houston. It is evident from a thorough examination of the graph and the statistics that the population of our major cities was substantially more infected than that of our smaller communities. We may also infer from the statistics that two of our states, Florida and Texas, have more excellent infection rates in several densely populated and touristic locations (Clark et el., 2020). Philadelphia, Pennsylvania, with only a total of five infected patients, was one outlier for this data that surprised everyone. Given its approximate population of 1.57 million, about the size of the whole state of West Virginia, Philadelphia has a prevalence rate of.0005. Philadelphia City, Pennsylvania Quick Facts. Regarding age categories impacted by the virus, children under 18 were the most affected group, with an average infected case rate of 42 individuals and the highest number of affected being 170 children in Miami, Florida.

The population aged 61 and older came in second with an average of 35 cases, with Jacksonville, Florida, reporting the highest number with 149 infected individuals among that age group. The age range of 19 to 30 was least impacted by this virus, with an average of 6 cases, while Phoenix, Arizona, had the highest number of cases, with a total of 20 cases in this age range. Respectfully, the prevalence rate per 100,000 persons of all ages was.0201, or 2.1 percent of infected people were 18 years of age or younger,.0032 or.323 percent were 19 to 30 years of age,.0081 or.81 percent were 31 to 60 years of age, and.017 or 1.73 percent were 61 or over. Upon closer examination of the data, it was discovered that Tulsa, which was not among our top five cities, had one of the highest percentages of one group being impacted. Nearly 93% of their 127 contaminated cases belonged to patients 61 years or older. In the most afflicted age category, 18 years and under, Miami, Florida, with 56.8% or more than one out of every two cases of their impacted population, had the highest rate. 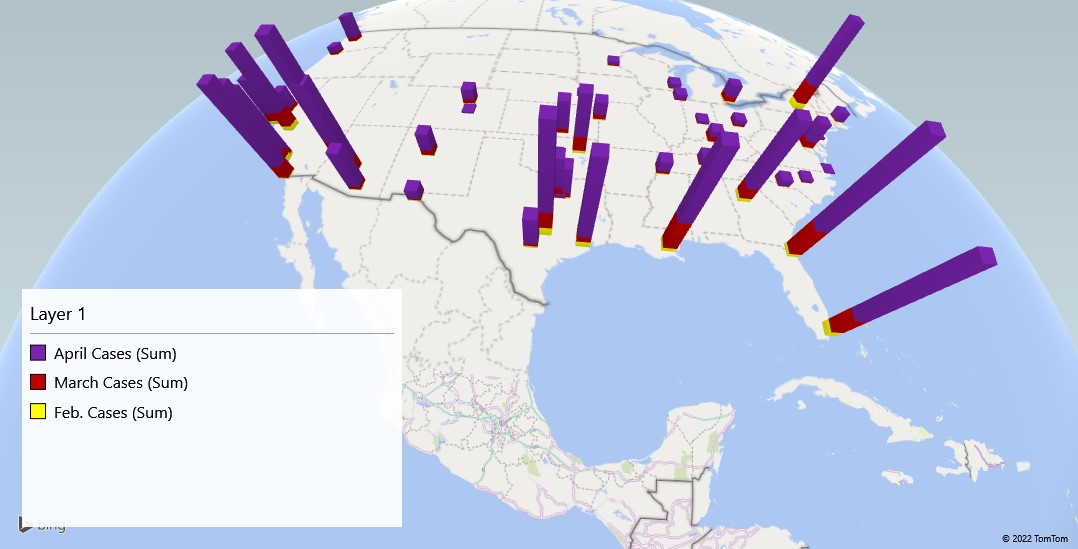 The case study research assesses how a fatal virus spread throughout several American towns. The virus infected 4852 people and spread to more than 50 states nationwide. According to the data in Report I, the top five most affected cities in this case study were Jacksonville, Miami, Phoenix, Austin, and Houston, with numerous more cities following closely behind in terms of the number of incidents. The affected age groups that are most vulnerable to the lethal virus will be described in this study. As a result, the study assesses the age group most impacted, the prevalence rate of age groups, the age group least affected, and the pertinent data illustrated by the visual representation. The number of patients in each age group afflicted by the fatal virus will be shown in a side-by-side bar graph created from the data.

Due to its high national rankings, years of expertise, and distinction in cancer prevention, MD Anderson is my preferred healthcare center for cancer treatment. Beyond their ground-breaking ingenuity and research-based clinical medicine, which introduces novel cures years before they become accepted by the public, it goes further. This is due to their emphasis on providing general healthcare. To guarantee that our measures protect our patients, their families, and workers as effectively as possible, MD Anderson played a significant role in observing the spread of COVID-19 in our neighborhood.

It stated that patients should call their care team in advance of their appointment if they have a fever, cough, shortness of breath, a positive COVID-19 test within the last 14 days, or if a member of their household has tested positive within that time frame. Everyone must pass admission screening and put on the face mask provided by MD Anderson. When a staff member is within six feet of a patient being transported or undergoing treatment, the patient must wear a face mask. The MD Anderson Cancer Center will gain a lot from this knowledge in several ways. The MD Anderson Cancer Center may now take the required steps in areas where the epidemic hasn’t yet struck and allocate resources to where they’re most needed, thanks to this recently acquired data. The previous investigation found that MD Anderson Cancer Center would gain by knowing the precise number of those suffering from this potentially fatal illness.

The number of cases varied from location to location since certain areas had a higher incidence rate than others. Gender also played a part, with varied incidence rates for men and women of various ages. The most hazardous cities were Jacksonville, Austin, Houston, Miami, and Phoenix due to their high exposure levels. Since the illness most afflicts these locations, MD Anderson Cancer Center may concentrate most of its resources on stopping the virus’s spread (Tzeng et el., 2020). The number of patients in each age group afflicted by the fatal virus will be shown in a side-by-side bar graph created from the data. Honesty, religion, patient privacy, the prohibition of discrimination, and social responsibility are ethical factors to be considered in the fight against COVID-19.

Significance of the research

Techniques to stop the illness from spreading further will considerably improve the study’s findings. The authorities may impose transportation restrictions between cities to prevent the disease from spreading to previously untouched areas. The institutions will have plenty of time to look into a potential treatment for the condition using the information provided. There will be a cure, decreasing the likelihood that the sickness will spread to all Americans. The study will firmly push the survey to consider other measures that will let most nations continue receiving treatment even when they are at a higher risk of contracting the infection. It is crucial to find creative ways to carry out these objectives and include the study in the national reaction and readiness plans for COVID-19. Increasing the capacity to “build back better” and fortifying health services to prepare them better to detect, treat, and care for patients in the future under all conditions.

In conclusion, the prevalence of this virus has increased resources so that individuals who are sick or at risk of becoming sick can be treated. To ensure that we can provide the resources to the people and regions of the country that need them the most, we have been working hard to collect and analyze data. Identify the age categories most susceptible to infection and the cities and states most vulnerable. During my investigation, I also determined the age groups most at risk for disease. Additionally, we discovered that the southern states had more cities and inhabitants compared to the northern states. This list includes states with both a high frequency and risk of infection. To ensure that all facets of the sickness are treated and that surrounding low-risk regions are safeguarded, DC, FDA, and any other government agency must collaborate. For this reason, businesses are essential. This information will be beneficial to the MD Anderson Cancer Center to determine the regions where the disease is most likely to spread. Resources include raising public knowledge of the disease’s symptoms, indications, and transmission processes, as well as the ways the general public may get in touch with the health division, which will be essential in the battle against the virus’s spread. By leveraging the information from this study, MD Anderson Cancer Center can better manage the disease’s spread. The hospital may use this knowledge to its advantage in developing plans that might aid areas with low and high incidences in successfully adjusting to any upcoming disease outbreaks.

Want an essay on the same topic?
Order an essay from our professional writers and get an essay written from scratch in just 3 hours. We work only with the best academic writers.
Place an order
Related Topics
Medicine & Health
USA
COVID-19
Information Analysis
Virus Spread

Adapting to Change and Healthier Lifestyles

Change is an inevitable process in a person’s life. An individual can adapt to various challenges presented by life through changes in behaviours. This feature is not different when influencing patients to make healthy lifestyle choices. Healthy living is a fundamental aspect of healthcare that assists in building a healthy society. People’s unhealthy life choices ... END_OF_DOCUMENT_TOKEN_TO_BE_REPLACED
Pages: 4       Words: 952
View Sample

How Can Biotechnology Be Used To Promote Environmental Sustainability?

This paper aims to instigate how biotechnology can be used to enhance a sustainable environment. Antoinette M. Mannion (August 24, 2009). Sustainable Development and Biotechnology. Retrieved from https://www.cambridge.org/core/journals/environmental-conservation/article/abs/sustainable-development-and-biotechnology/91D63D0C3ECBDCF30D0B163C2FCA5E21 Antoinette M. Marion suggests that resources should be utilized in a conserved manner, for optimal use and the coming generations, for optimal use and the future generations. There are ... END_OF_DOCUMENT_TOKEN_TO_BE_REPLACED
Pages: 7       Words: 1709
View Sample

Culture as a Social Determinant of Health

Culture is one of the most significant factors in the populations’ health. It refers to how different individuals have been shaped to live their lives. Culture has a strong influence over the acts carried out by different people. Individual thinking is affected by the culture they come from. Some people turn stereotypical and accept change ... END_OF_DOCUMENT_TOKEN_TO_BE_REPLACED
Pages: 5       Words: 1188
View Sample

Nursing informatics denotes the practice and the science applied in integrating nursing knowledge and information along with technology to manage and integrate health information. Nursing informatics helps in reducing the chances of encountering medical errors within the healthcare organization and all the associated costs. The combination of training staff, indulging in best practices, and process ... END_OF_DOCUMENT_TOKEN_TO_BE_REPLACED
Pages: 8       Words: 2145
View Sample

Homebirth or Hospital Birth; Which Is Safer?

Childbirth can be recognized as a life-changing incident for manhood, especially with first-time mothers. This makes women have different birthing options in their minds when it comes to giving birth to their children. Though there are many views and opinions surrounding childbirth, every mother wants to give their children the best when it comes to ... END_OF_DOCUMENT_TOKEN_TO_BE_REPLACED
Pages: 6       Words: 1572
View Sample

Programming tasks Report Through programming, several lessons are learned through the use of the assigned tasks and programming tools. Firstly, verifying the credit card numbers helps determine if the credit card number is valid. The coding accepts the 16 digit string, and then after running the numbers, the program should determine whether they are valid, ... END_OF_DOCUMENT_TOKEN_TO_BE_REPLACED
Pages: 4       Words: 885
View Sample
Need a plagiarism free essay written by an educator?
Order it today