We use cookies to provide you with the services at our best. By continuing to browse the website, you accept it. More.
Need a perfect paper? Place your first order and save 5% with this code:   SAVE5NOW
Home › Business › Crisis of Argentina

John Maynard Keynes is a 20th-century British economist who developed his economic thoughts and is the father of modern macroeconomics. Keynesian economic theories have significantly contributed to the economic theories and impacted the global economic policies of governments (Chen). His basic economic principle is that an investment level should exceed the saving rate to enhance business and economic growth. According to Keynes, when a country saves more than it spends, there will be a slowdown of the economy which will eventually cause a recession. Chen states that he believed increased spending would solve the problem of unemployment and recover the economy. Also, the Keynesian economic theory argued that demand drives supply and production, which is contrary to the conventional economist who held that supply drives demand (Chen). A healthy output combined with adequate economic expenditures boost the economy and decreased spending reduces demand, leading to a high unemployment rate. Considering the existing substantial external debt and defaults history, Argentina needs to cut spending to stabilize the economy and attract investors before benefiting from Keynesian economic principles.

Macroeconomic crises are situations where the economy deteriorates and is characterized by a declining GDP, plummeting of stock market and shares, and drying up liquidity. During a financial crisis, investors panic and sell their assets or withdraw from their savings (Kenton). They panic and rush to recover their finances because they fear their assets will lose value during the financial crisis. Also, a currency crisis, stock market crash, and sovereign default are considered economic crises. As Kenton maintains, financial crises are limited to banks, a single state, region, and worldwide, such as the Great Depression. Factors contributing to the financial crisis are systems failure, too much risk, regulatory absence, and contagious failures that spread among institutions like a wildfire. Even when measures are in place to avert an economic crisis, they still can occur.

A long time ago, Argentina was one of the wealthiest countries globally; however, in recent decades, it possesses a long history of a financial crisis, huge foreign debts, and has defaulted nine times since independence. Despite changing the currency five times, Argentina still suffers annual inflation of 105%. Current economic troubles result from long-existing issues and recent developments (Congressional Research Service 1). President Macri introduced a series of reforms to avert the effect of unsuccessful economic policies in the previous government. He cut export taxes, lifted currency controls, and resolved the 15- year dispute holding the Argentinian bonds restoring the country in the international capital market (Congressional Research Service 2). The interest rates were also increased by 25% to curb inflation. Congressional Research Service explains that although the economy shrank by 1.8% in 2016, in 2017, it recorded a growth of 2.9% (2). This government did not, however, address the 4.3% budget deficit of 2014. There was increased borrowing from the international market (Congressional Research Service 2). For instance, in 2016, the Macri government recorded an external debt of $56 billion, and with interest, the budget deficit was at 6.4% of GDP. Capital inflow to finance the deficit overvalued Argentinian Peso by 10-25%, exacerbating the currency account deficit.

In addition to over-reliance on external financing, decreased interest and value in Argentine bonds due to increased interest rates by the US further hurt their economy. Moreover, a severe drought affected commodity yields decreasing agricultural export revenue. Following Congressional Research Service, the investors sold their assets, putting more pressure on the Peso, and in 2018 Macri government borrowed $ 50 billion within three years (1). Despite the IMF program, the Peso continued to depreciate, which made it harder to tame inflation. After the term of President Macri term ended, President Fernandez tried to revive the economy by freezing utility tariff prices, increasing working wages, reducing medicine prices, tax rebates to a vulnerable population, and adding severance pay (Congressional Research Service 2). To offset the cost, the government increased taxes. He also addressed the public debt by talks with the IMF and other creditors. The Covid- 19 pandemic hurt the Argentinian economy by 5.7% in 2020 due to early lockdowns even though it slowed the transmission rate (Congressional Research Service 2). By printing money to finance the government, the country is at risk of another further inflation. 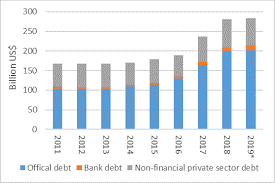 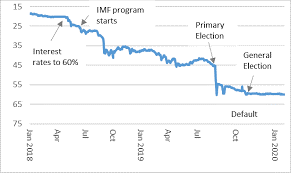 By missing the $ 503 million interest payment in 2020, Argentina defaulted on debt payment for the ninth time. There are ongoing talks to swap the old bonds with new bonds to offer some debt relief by reducing principal, interest rates, and emergency extension (Congressional Research Service 2). The IMF also acknowledges that restructuring the offer to bondholders can stabilize the external debt. Keynesian principles advocate for more government spending than saving (Chen). In this increased spending, decreased taxes in periods of recession boost the consumer purchasing power by creating more jobs. The total spending power of a government determines the production and employment rate (Chen). John Maynard Keynes argues that even in times of crisis, the government maintains the economy by increasing investment and spending power even at the cost of incurring external debt.

Over the years, the Argentinian governments have overly relied on external funding and spent most of it solving short-term issues such as improving the quality of life. Increasing taxation to curb inflation, however, works at their disadvantage. Incorporating Keynesian economic principles will not be of much help to the Argentina financial crisis. The country has a long history of debts defaults due to significant external debts. Although Keynesian principles work in some economies and recommend external borrowing, the Argentinian economy already has a substantial financial debt (Chen). Therefore, I doubt that Keynes would recommend more foreign debt to a volatile economy. According to the Wharton University of Pennsylvania, the country needs to cut spending to recover economically. Once the economy is in better shape, it will attract foreign and domestic investments, which will further help stabilize the economy. Although there will be a short period of unemployment and poverty, in the long run, this will benefit the country (Wharton University of Pennsylvania). Additionally, when the economy is better, the country can then apply Keynesian economic principles. To summarize, for the Argentinian economy to recover, .they need both political stability and political-economic discipline.

Argentina is burdened by large financial debts and a long history of defaulting; to benefit from Keynesian economic thoughts, they need first to cut spending to stabilize the economy and attract domestic and foreign investments. Historically, the country largely depended on external loans accumulating large debts which they were unable to pay. In short, stable economies attract foreign and local investments; therefore, the Argentina government should stabilize the economy.

The Wharton University of Pennsylvania. “What Will It Take To Rescue Argentina’s Economy?”. Knowledge@Wharton, 2019, https://knowledge.wharton.upenn.edu/article/argentina-economy/.

Want an essay on the same topic?
Order an essay from our professional writers and get an essay written from scratch in just 3 hours. We work only with the best academic writers.
Place an order
Related Topics
Economics
Crisis In Argentina
Argentina Foreign Debt
Peso

Research Report on the Company Amazon

Introduction The purpose of this stock project is to research and analyze the financial health of one of the prevalent publicly-traded corporations in the world, Amazon.com. This stock analysis will include an analysis of the current and past financial performance of the company as well as a critical analysis of the company’s insider trading activity. ... END_OF_DOCUMENT_TOKEN_TO_BE_REPLACED
Pages: 7       Words: 1664
View Sample

English versus Dutch Auctions In an English auction, buyers compete openly to outbid one another in order to purchase real estate. Bids are continually raised, and the item is sold to the highest bidder. It is also possible to conduct a Dutch auction, which is descending and includes auctioning with prices reducing and selling the ... END_OF_DOCUMENT_TOKEN_TO_BE_REPLACED
Pages: 10       Words: 2494
View Sample

In economics, profit is the difference between a firm’s revenue and the costs it incurs to produce goods or services (Begg et al., 2020). The main goal of any business is to generate profits, which can be used to reinvest in the business, pay shareholders, or provide other benefits for the owners. Two main models ... END_OF_DOCUMENT_TOKEN_TO_BE_REPLACED
Pages: 3       Words: 609
View Sample

Effects of Social Loafing and How To Prevent It

By working together with others, rather than just on a task, people are more likely to “social loaf” or put in less effort overall. Because of everyone’s unique skills, experiences, and dedication to the task, group projects are often seen as the most efficient means of achieving positive outcomes (Gabelica et al., 2022). The rebellious ... END_OF_DOCUMENT_TOKEN_TO_BE_REPLACED
Pages: 4       Words: 938
View Sample

Executive Summary Human resources (HR) is thought to be the most valuable asset of a company, but only a few companies can utilize all of their potential. This paper will explore two Fortune companies that appear to be ranked as the best in exercising HR practices. First is Walmart Retail Company, an international American retail ... END_OF_DOCUMENT_TOKEN_TO_BE_REPLACED
Pages: 11       Words: 2782
View Sample

Sports Event tourism provides a common platform for cooperation and development for both the sport and tourist sectors. S port tourism is a colloquial term that refers to the fusion of sporting and tourist activities (Mollahet al., 2021). Since the 1990s, both sport and tourism corporations, as well as academics, have paid increasing attention to sport ... END_OF_DOCUMENT_TOKEN_TO_BE_REPLACED
Pages: 12       Words: 3220
View Sample
Need a plagiarism free essay written by an educator?
Order it today