We use cookies to provide you with the services at our best. By continuing to browse the website, you accept it. More.
Need a perfect paper? Place your first order and save 5% with this code:   SAVE5NOW
Home › Environmental Issues › Climate Change: Rising Sea Levels

Environmental scanning refers to the art of systematically exploring the external environment to comprehend nature and the rate of the transition occurring together with identifying potential opportunities that may impact future developments of organizations. The scanning analyses both new, strange, and weird ideas along with unravelling current trends in the environment (Conway, 2009). One aspect that signifies the presence of climate change is global warming. Global warming is a long-term process in which the earth’s surface heats up due to human activities such as burning fossil fuel that raises the temperature of greenhouse gases responsible for heating the atmosphere (Conway, 2009). This paper will set off with a futures wheel diagram, elaborate on the consequences of rising sea levels, enumerate the four sequences of the products, and finalize the implications of the four sequences of impact. 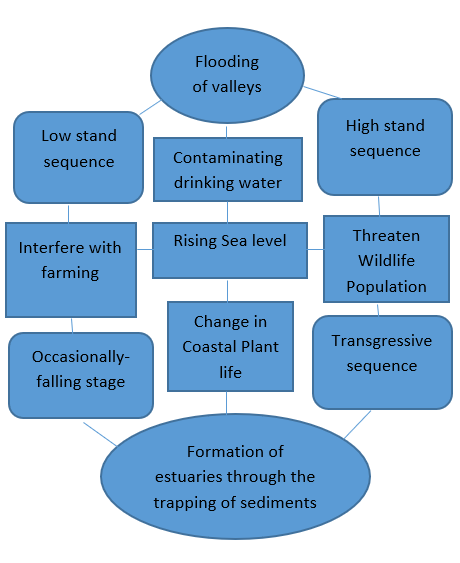 Apart from causing flooding, rising sea levels will also bring about other detrimental impacts on the environment. For instance, the increase in sea levels will contaminate the drinking water hence depriving people of clean water to take and use for domestic purposes. Rising sea levels are more likely to cause the seawater to seep into the freshwater sources along the shore, depriving the residents of freshwater for drinking (Glenn, 2009). Besides, saltwater is unsafe for drinking, and removing salt from the water is expensive and complicated. The other consequence of rising sea levels is threatening the wildlife population. Many forms of wildlife make their homes on the beach, and the rise in shorelines leads to floods in areas inhabited by coastal animals (Glenn, 2009). Therefore, the habitats of these animals have been swept away hence leaving them with no place to stay.
The other detrimental consequence of rising sea levels is interfering with farming. The same freshwater sources are used for irrigation on the land located at the sea’s shore. Therefore, the intruding seawater could make the groundwater sources saltier. When used for irrigation, it kills crops or causes them to have stunted growth (Conway, 2014)—like for drinking water, producing freshwater for irrigation purposes is costly and unsustainable in the long run. The last consequence of rising sea levels for consideration in this paper is changing the coastal plant life (Conway, 2014). The increased frequency of saltwater hitting the shores is likely to change the chemistry of the soil located in the coastal regions. This change in the chemical characteristics of the earth will cause the permanent disappearance of some plants from the shoreline while trees may experience stunted growth.
Apart from the consequences of rising sea level, there also exists sequences in which the level increases. The first type of sequence is a low stand characterized by an initial fall in the sea level followed by a slow relative rise (Glenn, 2009). The transgressive sequence occurs when the sea level rises close to the land, causing the shoreline to move towards higher ground. This often results in flooding, usually brought about by land sinking or by the ocean basins being filled with water (Conway, 2014). Thirdly, a high stand sequence is generally recorded when the relative sea level rises, and there is enough sediment supply to produce continuous regression. Finally, the occasional falling stage is depicted by erosive-based shore face sand bodies on the shoreline areas. The erosion responsible for depositing these sand bodies emanates from wave scouring during the sea-level fall.
During the late low stand, the relative seal level rises slowly, permitting the incised valleys to flood and form estuaries. The sediment of the ocean is trapped in these estuaries and prevented from reaching the shelf (Glenn, 2009). This process intensifies during the transgressive sequence. Furthermore, the flooding intensifies with a transgressive series that results in a high stand sequence. The waves slow down, and the sea level is expected at the occasionally falling stage.

Want an essay on the same topic?
Order an essay from our professional writers and get an essay written from scratch in just 3 hours. We work only with the best academic writers.
Place an order
Related Topics
Climate Change
Rising Sea Levels

Introduction While the role of environmental governance and responsible policies is generally recognised, some current initiatives still reflect the negative influence of postcolonial environmental practices. Moreover, such issues are not adequately addressed by the majority of modern policy experts, contributing to the further accumulation of such risks. The present paper provides the critical review of ... END_OF_DOCUMENT_TOKEN_TO_BE_REPLACED
Pages: 7       Words: 1805
View Sample

Introduction The steady heating of the Earth’s crust, oceans, and atmosphere through time is referred to as global warming. Researchers have been tracking the growth in global mean temperature over time since the late 1800s. The average surface temperature of the Earth has grown by 1.4 degrees Fahrenheit (0.8 degrees Celsius) over the previous century, ... END_OF_DOCUMENT_TOKEN_TO_BE_REPLACED
Pages: 10       Words: 2605
View Sample

The Daqing groundwater has been polluted by the effects of petrol drilling industries that have populated the Daqing oilfields. The effects of the pollution are observable as the water has changed in appearance and is now smellier from the pollutants. The refineries that populate the city are responsible for the increased rate of pollution. In ... END_OF_DOCUMENT_TOKEN_TO_BE_REPLACED
Pages: 6       Words: 1610
View Sample

An environment is a condition or a surrounding of people, plants, and animals in which they live. There are specific pressing environmental issues today. These issues affect the daily living activities of the inhabitants of a given environment. The problems can be as a result of nature or as a result of human activities. Pollution ... END_OF_DOCUMENT_TOKEN_TO_BE_REPLACED
Pages: 3       Words: 670
View Sample

Dry weather that lasts for an extended amount of time is known as a drought. severe crop damage and water supply shortages. It also causes impacts on vegetation, animals, and people. It can also be called a long-term drought. period with less-than-average amounts of rain or snow in a particular region. There are leading causes ... END_OF_DOCUMENT_TOKEN_TO_BE_REPLACED
Pages: 3       Words: 665
View Sample

According to NYC Emergency Management (2017), the Citywide Incident Management System (CIMS) is a well-established management process in New York City for dealing with emergencies, incidents, and planned events. It specifies duties, responsibilities, and authority for the city, state, and other government organizations conducting and supporting emergency response. It also gives the city a structure ... END_OF_DOCUMENT_TOKEN_TO_BE_REPLACED
Pages: 3       Words: 648
View Sample
Need a plagiarism free essay written by an educator?
Order it today