We use cookies to provide you with the services at our best. By continuing to browse the website, you accept it. More.
Need a perfect paper? Place your first order and save 5% with this code:   SAVE5NOW
Home › Social Issues › A Comparative Review on the World Hunger and Possible Solutions

A Comparative Review on the World Hunger and Possible Solutions

Food security has been a major problem for mankind for centuries, causing millions of deaths, malnutrition, economic collapse and conflict. Today, many people are experiencing food shortages and its effects. Food shortages arise from multiple factors, a major cause being poor governance in nations, which are linked to corruption, failing political affiliations and economic breakdowns (Atkins, 2017). As it is generally thought, food security has not been majorly as a source of drought, but a governance issue. This survey assesses the changing distribution of world hunger over time, the problem behind world hunger, and possible strategic solutions to curb this problem.

To establish the underlying problem well enough, it is worth analysing the existing data in order to compare the trends in world hunger. In this case, we do a comparison of the world hunger in 1990, comparing it to most recent distribution in 2012, between 10 countries across the world.

It is clearly seen that the total number of people who are experiencing world hunger has dropped from 1015 million to 805 million people. However, even with this trend, a closer look reveals that some countries have increasing trends in hunger. The following countries had an increase in hunger: Sub-Saharan Africa (17.3% to 26.6%), Southern Asia (28.8% to 34.3%), Western Asia (0.8% to 2.3%), and North Africa (0.6% to 0.7%); all other countries in the study contributed to this decline in world hunger. The next section draws insights from the data characteristics revealed.

The problems that are faced with countries with hunger levels in this study are majorly a sluggish growth of the economy (which is majorly accused on governance) and health problems.

Sluggish growth of the economy

A close link exists between poverty and malnutrition, and disadvantaged persons often lack access to education due to financial restrictions.

Additionally, malnourished persons may have difficulty concentrating since their brain does not get the nutrition it need to function properly, which may result in a lack of understanding on the subject (Siddiqui, et al., 2020). As a consequence, a lack of education may cause these persons to become trapped in poverty as a result of their inability to find well-paying employment.

Due to a lack of food, many are driven to move in search of food and support. As a consequence, radical groups may spring up as individuals attempt to survive in their current circumstances. In the vast majority of cases, radical movements result in undesirable outcomes such as conflict and opposition to authority (Purvis, et al., 2019). These interrelated problems hinder economic growth and keep the majority of people’s living standards at or below the poverty line.

Hunger leads to malnutrition, which in turn leads to an array of other health issues. Malnutrition is particularly harmful to children, but it can also result in a number of health issues in adults. We are more prone to suffer from major mental health problems if our bodies do not receive appropriate nutrition or if they are low in specific vitamins or minerals, for example (Gundersen & Ziliak, 2015). Aside from causing nutritional deficiencies, malnutrition can also create more significant physical health problems such as circulatory failure, which can be fatal in severe cases. It is also possible that malnutrition could result in organ failure, particularly if the nutritional deficiency is extreme, and that malnutrition will result in strokes or heart attacks in severe cases.

To curb world hunger, this survey establishes that corruptive activities must be mitigated, and redistribution of wealth must be encouraged throughout the world. Only this way, will the underlying problems from hunger be solved. Under these two major factors, more and more solutions will automatically emerge. For example, with redistribution of wealth in pace, countries will be able to adapt to climate changes and employ methods like smart agriculture; a collection of practices designed to assist farmers in adapting and becoming more robust to the effects of global warming. Diversifying crop types, protecting natural resources, and constructing low-water sack gardens are some of the measures being used.

In this section, I evaluate the validity of curbing corruption and redistributing wealth to fight world hunger.

On curbing corruptive governance, anti-corruption measures must be implemented by all governments throughout the globe in order to tackle the malnutrition epidemic. Among these efforts is the fight against corruption not just inside their own country, but also in neighbouring nations. Commerce with corrupt nations should be restricted until their political systems have been rectified (UK Department for International Development, 2015). This has resulted in the fact that these nations would suffer substantial long-term economic costs if they do not overhaul their institutional structures. As a result, curbing immoral behaviour will aid in the resolution of the starvation situation.

On redistribution of wealth, governments must work together to achieve a more equitable distribution of wealth in their different countries. In many poor developing nations, a tiny number of powerful elites have sway over almost all of the country’s resources. When it comes to the general population, redistribution may be able to assist reduce poverty and therefore solve the malnutrition issue. As a consequence, all forms of gender discrimination will be immediately eliminated (TTOENDE Inequality, 2013). Women must take a more active role in economic activity and decision-making than they have in previous generations. Women’s empowerment empowers them to pursue higher education and make a positive contribution to society.

World hunger, in these modern times, is not only a matter of climatic conditions, but other accompanying situations as discussed in this paper. The issues have been established to arise from basic weaknesses from governance and poverty, which give rise to other negative issues that foster food shortages. The provided solutions will work, however in a system where the main issue with hunger arises. With references to the data used in this study, the countries with increased hunger trends will be able to reduce hunger, by vouching for good governance and enhance wealth distribution.

Atkins, P. J., 2017. Why hunger is on the rise in the world, and what can be done about it, Durham: Durham University.

TTOENDE Inequality, 2013. Even it up: Time to end extreme inequality, s.l.: OXFAM. 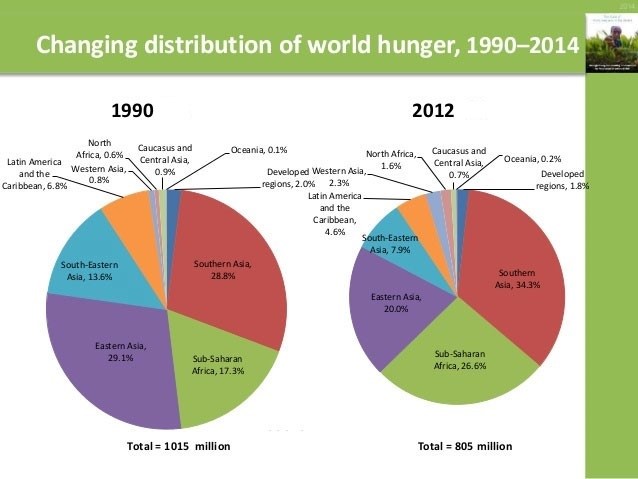 Figure 1: The data used in this study, showing the change in 10 countries; percentage of people affected by hunger.

Want an essay on the same topic?
Order an essay from our professional writers and get an essay written from scratch in just 3 hours. We work only with the best academic writers.
Place an order
Related Topics
Hunger
Solutions
World Hunger

United States’ Response to Al-Qaeda and ISIS Threat The Bush administration applied a deterrence strategy to curb the threat of Al-Qaeda within and outside the United States. The first phase of the deterrence campaign involved warfare against the Taliban government. Two decades ago, U.S. Marines and native Afghan rebel groups removed the Taliban from power after ... END_OF_DOCUMENT_TOKEN_TO_BE_REPLACED
Pages: 10       Words: 2610
View Sample

The Problem of Homelessness for Working People in America

The problem of unemployment and homelessness is not new in the United States, especially for people without a college education. In the article “Americans Want to Believe Jobs Are the Solution to Poverty. They’re Not,” the author’s central claim is that the increase in productivity has not translated to an increase in wages. Millions of ... END_OF_DOCUMENT_TOKEN_TO_BE_REPLACED
Pages: 3       Words: 779
View Sample

Chronicling the 9/11 Terror Attacks: For How Long Will Muslim Americans Battle Islamophobia?

Introduction Days after the deadly September 20, 2001, attacks on New York and Washington, the United States (US) administration vowed to deal with al-Qaeda terror groups who killed thousands of its citizens. On September 20, 2001, George Bush said that the perpetrators of the heinous attack that killed thousands of people should be sought and ... END_OF_DOCUMENT_TOKEN_TO_BE_REPLACED
Pages: 6       Words: 1633
View Sample

Violence against women is defined in the United Nations as “Any act of gender-based harassment that causes or is likely to cause psychological, sexual, or bodily pain to women, such as intimidation, threats of such acts or arbitrary denial of liberty, whether in public or private life (Cruz et al, 2016).” Violence against women includes; sexual ... END_OF_DOCUMENT_TOKEN_TO_BE_REPLACED
Pages: 6       Words: 1575
View Sample

Introduction Firearms violence is the most common cause of homicide and suicide (Wintemute, 2015). It is noted that some of the determinants of violence include emotional, social, and environmental factors. Various approaches can be utilized to stop gun violence. Nonetheless, a public health view to firearm violence would be best to implement as it can ... END_OF_DOCUMENT_TOKEN_TO_BE_REPLACED
Pages: 4       Words: 953
View Sample
Need a plagiarism free essay written by an educator?
Order it today