We use cookies to provide you with the services at our best. By continuing to browse the website, you accept it. More.
Need a perfect paper? Place your first order and save 5% with this code:   SAVE5NOW
Home › Business › Why Is the Recent Inflation in the United States So High?

Why Is the Recent Inflation in the United States So High?

Currently, Inflation is the most significant economic problem in the United States. Individuals living in the United States are experiencing high prices at the gas pump, grocery stores, and malls. It is clear that Inflation has settled in, and most economists are projecting that this might continue into early next year. The rapid increase in Inflation has threatened the Biden Administration’s plan for economic recovery.

The current inflation rates are the highest in three decades. The Consumer Price Index measures consumers’ prices for services and goods every day. This index increased to 0.9 percent in October 2021 (Thorbecke, 2021). Compared with the same period last year, this was a 6.2 percent increase in Consumer prices within one year (Thorbecke, 2021). The last time such an increase in consumer prices was recorded is 1990.

Over the last 12 months, the measure for all items or the ‘core index’ (except for energy and food) increased by 4.6 percent (Thorbecke, 2021). This was the highest increase in one year since August 1991. The core index increased to 0.6 percent in October and 0.2 percent in September. In October 2021, the index for gasoline increased by 6.1 percent, while energy increased by 4.8 percent, compared to the same period last year (Thorbecke, 2021). Gasoline has recorded a consecutive increase for the last five months. According to the Department of Labor, most of the indices in the United States recorded a sharp increase. Some of the most affected include used trucks and cars, food, shelter, and energy prices. However, the prices for alcoholic beverages and airline fares declined in October.

Figure 2: The percentage changes in the Consumer Price Index (Bureau of Labor Statistics, 2021) 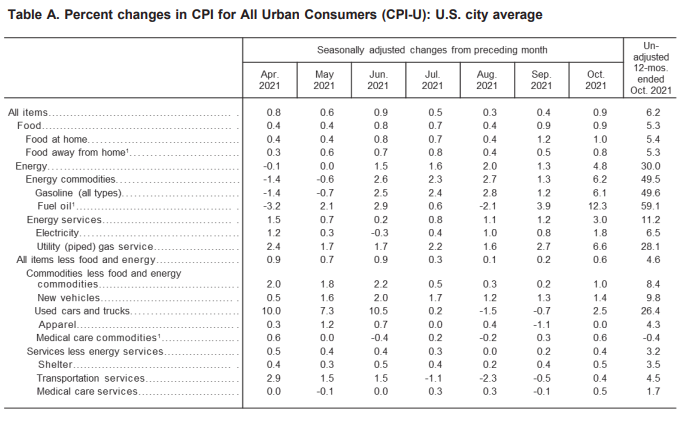 As Inflation continues to cause pain to many Americans, the Federal Reserve has continued to assure people that the situation is temporary. The Inflation of the 1970s caused a lot of uncertainty and pain in America. Hence it acquired the name ‘Great Inflation.’ About four decades later, the same situation is repeating itself with a sharp rise in prices. Although the United States has the resources and capability to respond to Inflation, there is much pressure among the consumers.

When Covid-19 entered the United States, the government imposed measures to slow down the spread of the virus. Such measures include lockdowns or restrictions on movement, closure of businesses such as bars and restaurants, closure of sports activities, and many other things. This led to the economy’s collapse in 2020, where the economic output decreased by more than 31 percent, and more than 22 million jobs were lost (Wiseman, 2021). Businesses started preparing for the long struggle as organizations reduced their investments and changed their long-term plans.

Unexpectedly, the economy did not experience a long-term downturn. However, instead, there was a slow recovery attributed to the mass government spending and the precautionary measures taken by the Federal Reserve. The rollout of vaccines in spring led to shops, restaurants, and bars.

Suddenly, many businesses were struggling to meet the rising demand. Employers could not hire staff or purchase enough commodities to serve the rising orders. The businesses returned, leading to high traffic in freight yards and ports. This led to a big snarl in the global supply chain. The cost of goods increased, and business owners had to pass the same prices to consumers. This was a painful situation for the people because they had used all their savings during the pandemic.

Some economists argue that the Biden Administration applied misguided policies and downplayed Inflation which led to the economic collapse. The government made enormous spending, including $1,400 household checks and a $1.9 trillion coronavirus relief package, which are likely to have overstimulated the economy and caused Inflation (Wiseman, 2021). Although Joe Biden has acknowledged that the current Inflation hurts the pocketbooks of many Americans, he remains optimistic that the situation will come to an end. Most particularly, President Biden believes that the $1 trillion infrastructure package that will be used to finance projects in ports, bridges, and roads; is likely to slow the disadvantages in the supply chain.

There are different views on how people can protect themselves from the impact of Inflation in the United States. The most important thing people should do is to protect their investments. Investing in the stock market is not a very good idea because the implications of Inflation to the economy might push the stock market down, leading to losses. Also, keeping money in cash is very dangerous because the value of money can get eroded easily. Therefore, most economists argue that the best way to keep your investments safe is to open a savings account to continue earning interest during the crises. Keeping money into interest-bearing accounts is the best way of protecting money; in some cases, the money might grow faster than the price of goods.

What will likely happen in the Future?

If employers continue struggling to meet the demand for services and goods, there is a likelihood that consumer price inflation will continue. In 2021, there has been an increase in 5.8 million jobs, which means that people will continue spending on new cars and furniture (Wiseman, 2021). Moreover, the disadvantages of the supply chain have no sign of slowing down. However, other economists suggest that it is very difficult to predict how long the constraints in the supply chain will persist or how they are likely to affect Inflation. Although the global supply chain is very complex, there is hope that they will be back to normal, but this will happen unknown.

The Federal Reserve is under high pressure to determine how prices should be controlled. In November, the Federal Reserve announced that it would reduce the purchase of bonds which it had started in 2020. This will act as an emergency measure that will help in boosting the ailing economy. More so, the officials at the Federal Reserve predicted in September that they would raise the interest rate of the Federal Reserve benchmark from the current zero before the end of 2022 (Wiseman, 2021).

Want an essay on the same topic?
Order an essay from our professional writers and get an essay written from scratch in just 3 hours. We work only with the best academic writers.
Place an order
Related Topics
USA
Economics
Inflation
Consumer Price Index

Impact of Self-Concept/Perceptions/Mindset On Organizational Effectiveness Firstly, self-concept has been associated with organizational commitment among employees, which in turn affects organizational effectiveness. According to a study conducted among public employees in Brazil, it was discovered that employees who had higher perceptions of achievements and professional competence are more likely to be more committed to the ... END_OF_DOCUMENT_TOKEN_TO_BE_REPLACED
Pages: 4       Words: 1096
View Sample

Gross Domestic Product and Its Components

The gross domestic product commonly abbreviated as the GDP is an index of a country’s entire economic output. It is the total value of everything produced within the boundaries of a particular country irrespective of whether it is the production of the citizens or foreigners. The nominal GDP measures the size of the economy in ... END_OF_DOCUMENT_TOKEN_TO_BE_REPLACED
Pages: 3       Words: 776
View Sample

Introduction Apple is the leading American company in technology founded in the year 1976 by Steve Jobs and its specialization deals with consumer electronics, hardware, online services and computer software. It is the leading technology company in the world and by 2021 it had to total $284 billion in revenue being the most valuable company ... END_OF_DOCUMENT_TOKEN_TO_BE_REPLACED
Pages: 12       Words: 3045
View Sample

Reasons for the Middle Class Decline

Is it true that the middle class in the United States is disappearing? If indeed there is a decline in this category of citizens, what are the reasons behind it? Initial signs of the decline of the American middle class became conspicuous during the second term of George W. Bush. It is the juncture at which the middle class citizens stopped believing in the Ameri... END_OF_DOCUMENT_TOKEN_TO_BE_REPLACED
Pages: 14       Words: 3607
View Sample

Introduction Industrial Revolution played an essential role in the changing of the business world. Technological advancements keep creating a demand for the growth of many businesses worldwide, helping them adapt and shift to fit in the changing competitive market (Manish, 2015). The current business world revolves around a knowledge-based economy rather than a trade-based. Technology does ... END_OF_DOCUMENT_TOKEN_TO_BE_REPLACED
Pages: 7       Words: 1795
View Sample

Marketing Audit for Adidas Group’s Company Executive Summary Companies use marketing to interact with their customers and potential buyers in order to persuade them to acquire their merchandise. This essay examines Adidas Group’s marketing approach, focusing on how it has impacted the firm’s industry stance. Since its founding, the corporation has preserved a market governance ... END_OF_DOCUMENT_TOKEN_TO_BE_REPLACED
Pages: 9       Words: 2234
View Sample
Need a plagiarism free essay written by an educator?
Order it today