We use cookies to provide you with the services at our best. By continuing to browse the website, you accept it. More.
Need a perfect paper? Place your first order and save 5% with this code:   SAVE5NOW
Home › Business › The Concepts of Management

The Concepts of Management

Over many decades, the notion of Management has evolved into a critical and distinguishing factor in today’s competitive and complex corporate environments. As a result, practical and relevant Management is essential for the long-term viability and survival of any company unit. Consequently, the management idea implies the need to engrave all aspects of a firm as its whole. As a manager, it is critical to ensure that existing resources are used effectively by defining specific goals. A manager’s engagement with the organization’s human labor force and the required physical resources while drawing on the many foundations created in the management process will achieve the intended goals and objectives in a timely and efficient manner. This article will consist of demonstrate several management foundations that are involved in managing processes, including “managing heroically, managing with and against scientific determinism, and managing with freedom and responsibility, among other things.” Because of this, comprehending the concepts and theories and having insight into the ever-changing, highly competitive business environment will result in a high degree of Management built on a foundation of applicable creativity, discovery, and innovation in the business environment.

According to the definition, a hero is a person who possesses heroic attributes or has committed a heroic deed in the view of others. Archetypal heroes do good or heroic deeds, achieve their objectives or are admired by their peers and fellow citizens. Odysseus, the Homeric epic hero, is an excellent illustration of what is meant by the term “archetypal hero.” Odysseus demonstrates his heroism by rescuing lives and conquering challenges (Williams, 2018). But there are weaknesses in his acts weaknesses may put his actions at the risk of being compromised.

This permits his group to cross through the island unscathed, but it also leads his crew to lose faith and respect in him due to the incident. His arrogance is often regarded as his most significant trait, and it negatively impacts him and his crew on their voyage. Additionally, there are instances in which he may immediately contradict his deeds with arrogance, even though his earlier efforts were noble. His confrontation with Polyphemus, a cyclops and son of Zeus, who was slaughtering his men, was a good illustration of how he handled himself. This demonstrates how his arrogance drove him and his crew to defy his expertise and guidance, eventually resulting in their deaths.

Odysseus, aided by his companions, surges forward and smashes a flaming stake into Polyphemus’ eye, temporarily blinding him and causing him to flee Williams, 2018). Other Cyclopes believe he is making a fool of himself or something wrong with the gods. “And with that threat, he let my ram to go free outdoors.”

There are many different philosophical explanations for how the universe works and why particular occurrences occur in the way they do. People often make choices based on these ideas, resulting in a disagreement about whose opinion is the most accurate. As a philosophical approach to understanding how things in life are determined, determinism is one of the most prominent choices available.

The definition of determinism is a philosophy or ideology founded on the idea that one does not influence what physically occurs. Determinists believe that all acts and occurrences are shaped by a precise amount of predestined conditions, which ultimately determine what happens to the person in question. All acts have a reason, and as a result, they can all be anticipated (Şen, 2017). Determinism is employed in various domains, such as philosophy, psychology, and perhaps even behavioral treatment, to describe the way things happen.

In the sixth or seventh century B.C.E., Greek philosophers, including Heraclitus & Leucippus, developed the notion of determinism for the first time. It was subsequently examined and developed by Aristotle, who lived in the third century BC. Since its inception, deterministic interpretations and ideas have been incorporated into a wide range of other philosophical and theological traditions. These include Buddhism, Taoism, as well as other Eastern as well as Western traditions (Şen, 2017). When the “Irish philosopher William Hamilton” coined the word determinism in 1846, he referred to activities determined by a predetermined chain of causality.

When the notion and idea of determinism are presented in realistic settings, it becomes easier to comprehend them and apply them. The determinism instance that follows will demonstrate how determinists think events will unfold as follows: 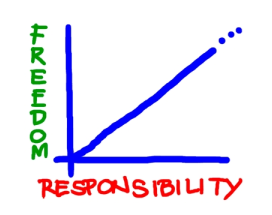 A guy is traveling down the road in his automobile when a deer unexpectedly rushes out in front of him. The driver swerves to avoid hitting the deer, causing his vehicle to go off the road and into a ditch. Determinists would argue that the accident was not caused by the man swerving to avoid the deer but rather by the deer running into the road and striking him. The result was that the automobile was forced off the road to avoid hitting the deer; this is yet another instance of causality concerning determinism. On the other hand, other schools of thought would argue that it is produced by elements that are under man’s control.

Freedom is accompanied by a set of obligations. When journalists use their freedom of the press, they have responsibility for what they write and how it may influence individuals, organizations, and society as a whole. Freedom of expression comes with the duty to consider what is said, to whom it is addressed, and why it is expressed. And independence at work is no different: it comes with a certain amount of responsibility (Fuller, 2016). Results, performance, and added value are all the responsibility of the individual.

In recent decades, a significant amount of freedom has been gained in the workplace. Many individuals today, particularly those employed in the technology or startup industries, enjoy much greater independence at work than their parents had during the industrial revolution.

High degrees of autonomy are associated with technical, inventive, and specialized tasks, and varied organizational settings, such as startup environments, need employees who are extremely adaptable and willing to take the initiative as the situation demands.

The amount of freedom and flexibility has expanded in many conventional firms; many employees are no longer tethered to their desks or office hours to do their job, and tasks are often delegated to lower levels within the organization. Many organizations have placed self-managing teams in place, teams that operate without a manager who directs their activities (Fuller, 2016). In whatever form, there is greater freedom and flexibility in the workplace, which necessitates a review of other areas of the organization and the workplace itself.

Having more freedom is a wonderful thing, but it also implies that there should be more responsible. If you were to put the correlation into a model, it would look somewhat like the following:

Freedom and responsibility are inextricably linked. They are and should be connected in some way. It is impossible to provide a great deal of freedom while simultaneously increasing responsibility. If you do that, you will not get the results you are looking for.

People will be wandering, taking advantage of the situation, and underperforming, and you will be left in a state of confusion. Even if your inventive team succeeds in completing outstanding initiatives, they are unlikely to be linked to your organization’s overall objectives.

Additionally, increasing responsibility while simultaneously restricting people’s freedom doesn’t work: it will result in a great deal of stress since individuals will feel responsible for something they have no control over, leading them to become depressed (Fuller, 2016). It will be a society in which individuals feel detached from one another and negatively affect life.

It is essential to strike the appropriate balance between freedom and responsibility. Autonomy is achieved by the combination of the two.

Moreover, autonomy is required for your inventive or tech-savvy employee to develop into a high-performing team member.

The many concepts have highlighted important management strategies towards the achievement of the company unit by using distinct management foundations employed in the course of an efficient managing process. Managing heroically has provided the manager with a new viewpoint on how to more effectively enter the management process to combat significant environmental changes. Finally, managing with freedom and responsibility helps the manager respect people following the company’s culture, which contributes to more successful business management overall. As a result, managers must use the foundations of Management to examine both contemporary and historical knowledge and experiences to determine if they are successful or ineffective.

Fuller, S. (2016). Morphological freedom and the question of responsibility and representation in transhumanism. Confero: Essays on Education, Philosophy and Politics, 4(2), 33-45.

Want an essay on the same topic?
Order an essay from our professional writers and get an essay written from scratch in just 3 hours. We work only with the best academic writers.
Place an order
Related Topics
Management
Concepts Of Management

Understanding the Ethics of My Major

Introduction Albert Schweitzer once said: “Ethics must begin at the top of an organization. It is a leadership issue, and the chief executive must set the example.“ Cambridge English dictionary has defined the meaning of ethics by” rules, principles, and standards for deciding what is morally right or wrong when doing business.” ethics is a crucial ... END_OF_DOCUMENT_TOKEN_TO_BE_REPLACED
Pages: 4       Words: 944
View Sample

Determinants of Residential House Prices in the US

Background The real estate industry faces short and long-term challenges ranging from housing variability, availability, affordability, financing and ownership elements and their vast resounding impact on the economy’s stability. There is a big gap in pricing as properties differ largely in value across locations; this elasticity causes a rise in demand which automatically forces the ... END_OF_DOCUMENT_TOKEN_TO_BE_REPLACED
Pages: 6       Words: 1501
View Sample

The Relationship between the Concepts of Employee Voice and Employee Representation  The concepts are ways through which employees make their grievances and views known to the management. They all serve to better employees and boost their performance. More specifically, employee voice refers to the process through which employees communicate their opinions to the employers and ... END_OF_DOCUMENT_TOKEN_TO_BE_REPLACED
Pages: 10       Words: 2539
View Sample

Introduction Authoritative pioneers face an undeniably powerful, complex, and capricious business climate in which innovation, globalization, information, and changing cutthroat perspectives influence the general presentation of their organizations in the present exceptionally questionable business climate. As Stopford (2001) calls attention to, in this mind boggling and evolving climate, administrators of little and enormous organizations are ... END_OF_DOCUMENT_TOKEN_TO_BE_REPLACED
Pages: 12       Words: 3076
View Sample

Introduction All organizations have a responsibility that goes beyond meeting their client’s needs. The business should offer sustainability by ensuring the economic, social and environmental wellbeing of current and future customers. However, Volkswagen went against this responsibility by fitting defeat devices in their diesel motor vehicles. The defeat device detected when the car was undergoing ... END_OF_DOCUMENT_TOKEN_TO_BE_REPLACED
Pages: 4       Words: 834
View Sample
Need a plagiarism free essay written by an educator?
Order it today