We use cookies to provide you with the services at our best. By continuing to browse the website, you accept it. More.
Need a perfect paper? Place your first order and save 5% with this code:   SAVE5NOW
Home › Business › Research Project Report: Economic Performance of the United Kingdom, France, Germany, and Spain From 2011 to 2021

Research Project Report: Economic Performance of the United Kingdom, France, Germany, and Spain From 2011 to 2021

This report aims to analyze the economic progress of four European countries: France, the United Kingdom, Germany, and Spain. These four countries are similar in that they are all first-world countries and can all be classified as high-income economies. This report will analyze economic trends in the four countries over the last ten years, from 2012 to 2021. The assessment of economic performance will employ temporal analysis of key economic indicators such as unemployment rates, inflation, gross domestic product (GDP), and gross domestic product per capita. The assessment should provide valuable insight into whether the four countries meet the goals of promoting economic growth, lowering unemployment levels, and maintaining low and stable prices for goods.

According to the Central Intelligence Agency (2022c), the United Kingdom left the European Union in 2016 following a popular referendum amid speculation that the move would result in poor foreign relations and poor economic performance. However, this has not been the case. The country of close to 68 million people is primarily an island nation, and most people are employed in the services sector, with the remainder in industry and agriculture. Germany is another European country bordering the Netherlands, Poland, and Denmark. The country has been a significant world power and was responsible for World War I and II and has the largest economy in Europe (Central Intelligence Agency, 2021). The German government increased the minimum wage to $9.79 in 2015. The country enjoys high budget and trade surpluses which means that the country’s economy is doing exceedingly well. The government recently embarked on a 15-billion-euro investment to stimulate private investment (Central Intelligence Agency, 2021). Nonetheless, this high-income country is one of the world’s leading economies, with a gross domestic product of over $4.2 trillion in 2020 (Central Intelligence Agency, 2021). The country is highly industrialized, and exports of machinery and natural resources like coal account for a large share of the country’s income. Spain was a powerful empire in the 16th and 17th centuries and even controlled the seas of England. The country, like Germany is also a member of the European Union and has adopted the Euro as currency in line with the European Monetary Union’s guidelines. The country faced a prolonged recession in 2008 following the global financial crisis that year (Criminal Intelligence Agency, 2022). As a result of the crisis, unemployment rates rose, more people relied on social benefits, and the government experienced declining revenues. France has a diversified economy that allows the country to remain economically stable despite global challenges. France’s economy faces challenges such as high expenditure with relatively low revenues, which has caused stagnation in GDP, with the country having a GDP of over $2.8 trillion in 2020 (Central Intelligence Agency, 2022).

This assessment includes an analysis of several economic growth indicators such as gross domestic product (GDP), adjusted national income per capita, unemployment rates, and inflation rates. It is worth noting that all four countries are high-income countries, according to The World Bank (2018). This means that these countries have a gross national income (GNI) per capita of over $12,696. Residents of these countries are typically wealthier than those from other countries worldwide and enjoy extensive social benefits coverage by their governments. Most countries in this category tend to be highly industrialized and have invested heavily in their infrastructure.

GDP is a valuable economic indicator because it measures all the value in goods and services that a country has produced during a period, typically one year. The graph below shows the GDP of four European countries from 2012 to 2020. The data indicates that the GDP of these countries has remained relatively high throughout this period, with significant dips happening towards the end of 2020 and in the period between 2014 and 2016. Peaks in GDP for all these countries are in the periods before either dip in GDP. The dip that occurred in 2020 was caused by government policies to reduce the spread of the coronavirus disease 2019, which reduced international movement and led to the temporary and permanent closure of many industries and businesses (). However, many countries are recovering from this shock to the economy. In Germany alone, the lockdown measures in the second half of 2020 were projected to produce 160 billion euros in government deficits. The situation is similar in other European countries where government expenditure to cushion people economically against the effects of the pandemic control measures increased while revenue decreased. 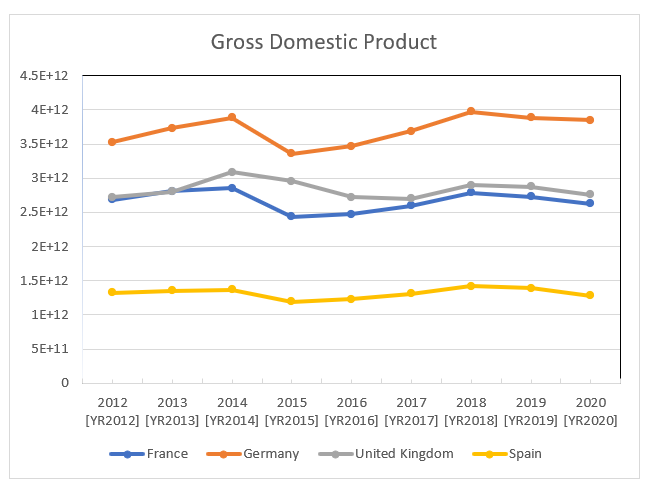 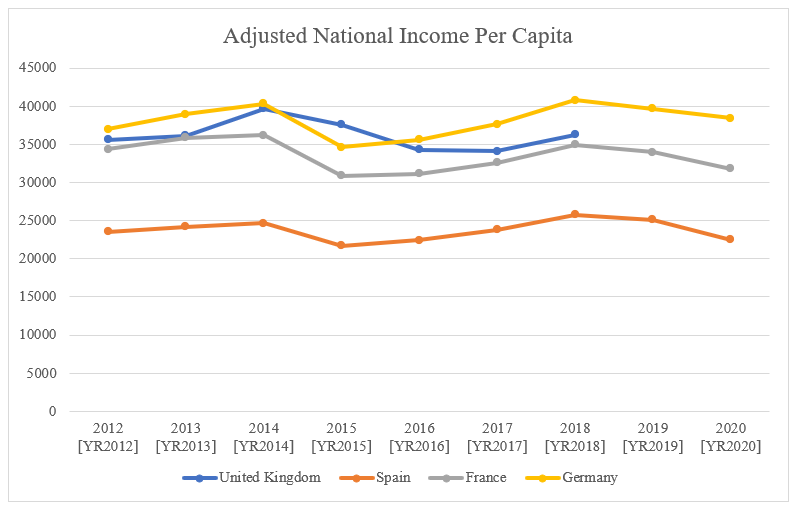 Inflation rates are usually an indication of a currency’s purchasing power. In this assessment, the consumer price index was used to measure the currency’s purchasing power. Figure 3 below shows that inflation rates fluctuated wildly but in rhythm with each other across all the four European countries assessed. Consistent with the declines in GDP and per capita income in the period between 2014 and 2015, there was a dip in inflation rates in most countries, with rapid deflation noted in 2015. Prices in Spain, for example, were lower in 2015 than they were in 2014, although this quickly changed in 2016 when inflation rates rapidly rose, reaching their peak in 2017 and 2018 before falling again in 2020. Inflation rates in all four countries are generally low, only reaching 3% in 2021 for Spain and Germany. This is probably a result of the reopening of the economies following the pandemic containment guidelines and the subsidization of economic relief packages offered by governments. 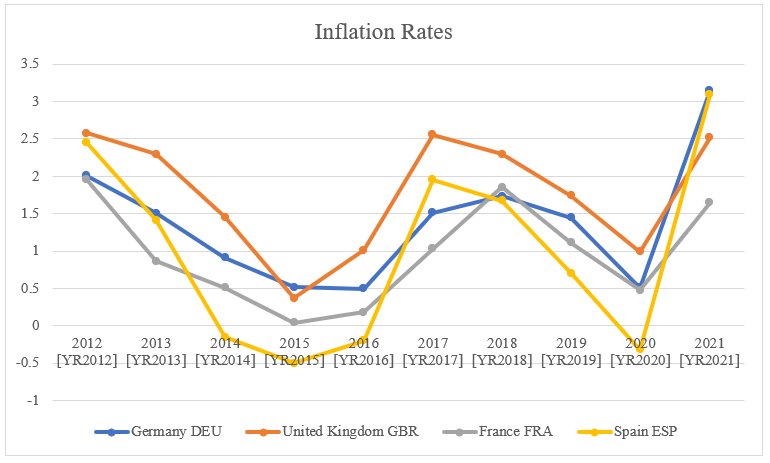 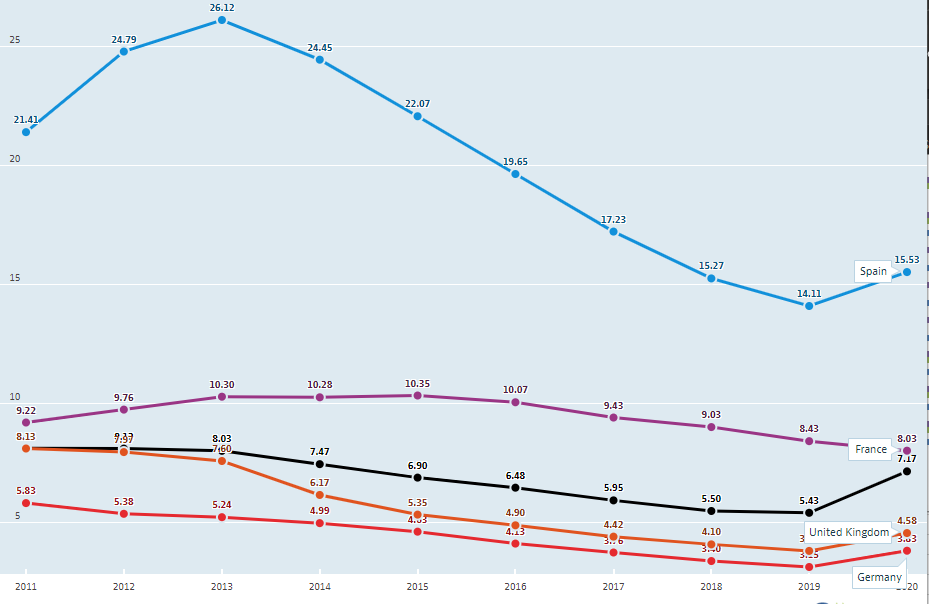 This analysis aims to determine whether the countries analyzed are achieving macroeconomic goals of promoting economic growth, limiting unemployment, and keeping prices low and stable. Over the last ten years, it appears that the economies of each country have generally stagnated, neither growing rapidly nor contracting significantly. However, the absence of rapid growth does not mean that the countries under assessment are doing poorly economically. Their GDPs are significantly higher than those of other countries around the world. However, the countries still have the potential to grow, and more can be done to increase the rate of economic growth. Prices of commodities seem to be fluctuating periodically, but inflation rates generally remain low, meaning that commodities are largely affordable for citizens in these countries. Price stability coupled with high per capita incomes indicates that residents of the four countries are experiencing a high quality of life. While unemployment rates in the three countries are acceptably low, Spain lags. The government needs to address this issue to reduce its expenditure on social security services. Rodriquez-Planas (2013) explains that Spain’s unemployment problem stems from the high labor segmentation in the 1980s. She also blames the lack of permanent employment contracts in favor of short-term contracts due to the high unemployment rates. The government must rapidly address the segmentation of the labor market in the country.

Want an essay on the same topic?
Order an essay from our professional writers and get an essay written from scratch in just 3 hours. We work only with the best academic writers.
Place an order
Related Topics
Economics
UK
Germany
France
Gross Domestic Product

The Coca-Cola Company is one of the world’s major beverage companies, handling and marketing Diet Coke, Coke, Sprite, and Fanta, four of the world’s top five soft beverages. Coca-Cola became the most valuable brand name globally due to these goods, and the corporation was able to achieve success in many areas of business. The firm ... END_OF_DOCUMENT_TOKEN_TO_BE_REPLACED
Pages: 4       Words: 827
View Sample

Preface I am a student in my final class. In this assignment, I am taking the strategic advisor role to advise Boeing Company about a strategic decision based on different models. I chose the strategic management subject because it is the central operation for most businesses in different environments and sectors. Strategic management offers an ... END_OF_DOCUMENT_TOKEN_TO_BE_REPLACED
Pages: 23       Words: 6176
View Sample

MMB five phases of Customer Loyalty We will learn that customer loyalty results from personal interactions between the customer and the firm as we examine the five stages of customer loyalty. The first of the five phases, awareness, is considered the most fragile. At this stage, the consumer has not had a chance to know ... END_OF_DOCUMENT_TOKEN_TO_BE_REPLACED
Pages: 5       Words: 1234
View Sample

Innovation Is a Process

Why it is Necessary to View Innovation as a Management Process and Sergey Brin’s Comment on Idea and Innovation The success of a business heavily relies on innovation and technological advancement in the current era. Innovation, as it is, does not apply and cannot create meaningful change without proper management strategies that aim for exemplary ... END_OF_DOCUMENT_TOKEN_TO_BE_REPLACED
Pages: 7       Words: 1793
View Sample

Organizational change management is a management process that combines transformational organizational change that is controlled and maintained by the leadership of the organization It necessitates total commitment from everyone involved, as well as constant communication. In order to be truly transformational, a company must have a clear strategy and implement it from the top down. ... END_OF_DOCUMENT_TOKEN_TO_BE_REPLACED
Pages: 9       Words: 2444
View Sample
Need a plagiarism free essay written by an educator?
Order it today