We use cookies to provide you with the services at our best. By continuing to browse the website, you accept it. More.
Need a perfect paper? Place your first order and save 5% with this code:   SAVE5NOW
Home › Social Issues › Mortgage Discrimination Data Capture

House ownership has reduced more for some races and ethnicities compared to others in the cities of California cities and New York cities. Currently, Hispanic and Black residents are still far less likely than white residents to own their houses, 41.3 percent, and 47 percent, respectively, compared to 71.9 percent for whites. As a result, the ownership disparity for blacks and whites notably worsened after 2004. A study of mortgage-market statistics reveals some of the obstacles that black and Hispanic homeowners and would-be purchasers continue to encounter.

According to a study of data obtained from the federal Home Mortgage Accountability Act, 27.4 percent of black participants and 19.2 percent of Hispanic participants were rejected mortgages in 2015, in comparison to roughly 11 percent of white participants. In reality, blacks have been turned down for mortgage loans at greater rates compared to other races, during the housing upsurge, and restoration stages and Hispanics are turned down at increased rates than non-Hispanics.

The explanation outlined by lenders for rejecting some mortgage applicants displays a certain variation based on ethnic background. The commonly reported explanation for the rejection of conventional house loans amongst whites and Hispanics, for example, is that their debt to income ratios are too high (25 percent and 26 percent, accordingly). For the blacks, a low credit record of 31% is the most commonly stated cause. Even if rejection rates were the same, fewer blacks and Hispanics would be obtaining house loans since mortgage requests from these communities have dropped substantially. Considerably, just 132,000 black people sought conventional loans in 2015, compared to 1.1 million in 2005, despite the demand for mortgage among Hispania’s and blacks as shown.

The graph below outlines the rejection rates as of 2015 to show how hard it becomes for blacks and Hispania to get mortgages. 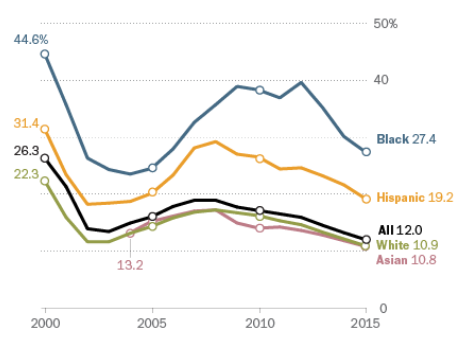 Not only is today’s candidate application less than in the past, but it also has a distinct racial and cultural make-up. In 2005, over 10% of conventional mortgage requests emerged from black residents; by 2015, that number had dropped to lower than 4%. Hispanics made around 14 percent of all applications in 2005, but just about 7% in 2015. From 2005 to 2015, the number of applications for conventional mortgages decreased by 69 percent altogether, but it fell 88 percent amongst blacks and 85 percent amongst Hispanics, compared to 66 percent for whites. On average, Blacks and Hispanics put down lesser payments on houses in relation to the total amount than other ethnicities.

According to a second study in 2015 data from the American Household Surveys on mortgage-holding residents, more than half of Hispanic and Black homeowners announced making deposits of less than 10% of the household’s worth, compared to 37% of whites. Around a quarter of white residents, on the other hand, indicated deposits of 21% or more, compared to only 17% of Hispanics and 12% of blacks. The table below shows how Hispanics and blacks are more likely to pay higher mortgage rates in California and New York cities.

To be more specific, in 2019, Mortgage loans held by Black and Hispanic householders were around 60% of what would be predicted based on their demographic share in California. This disparity was observed for both high- and low-income neighborhoods. Black women make up 30% of the inhabitants in California, yet just 8% of house loans are given to them. In regional analyses, the trend continues. Although black people make up 7.8% of all inhabitants in the Los Angeles/Glendale metropolitan area, only 4% of house purchase loans were obtained in 2019. Black people make up 3.6% of people in the San Francisco/Redwood city, but only get 0.7% of mortgages. Comparatively, between 2002 and 2008, the population of Black householders in the city fell by 10%, from 210,000 to 189,000 due to discrimination. Approximately 60% of Black mortgage loans were from only three locations in 2019: portions of the northern Bronx, Central Brooklyn, and Southeastern Queens.

The bank as a solution to intervene for the black and Hispania households can at first, expand the availability of down payment help. Secondly, it can improve the availability of credit at a reasonable cost. It must therefore provide business credit and mortgage to disadvantaged, low-income, and minority homeowners and regions, considering the history of housing discrimination. Additionally, reinvesting and providing tax incentives aimed at these localities would aid in the rehabilitation and development of these areas. However, these expenditures must be thoughtfully planned to avoid displacing existing inhabitants and companies. Banks should also invest in affordable rental property. This is because capital investment in housing equality is important to addressing black households’ comparatively large financial constraints and housing insecurity. Above all, banks must follow and execute anti-discrimination regulations in mortgage lending, such as those found in the ‘Fair Housing Act and the ‘Equal Credit Opportunity Act (ECOA)’, both of which were enacted in 1974.

Want an essay on the same topic?
Order an essay from our professional writers and get an essay written from scratch in just 3 hours. We work only with the best academic writers.
Place an order
Related Topics
USA
Discrimination
Black People
Hispanics
Mortgage

The cycle of violence, also known as the cycle of abuse, is a theoretical framework that explains the pattern of behaviors by the abuser/aggressor and the victim in a relationship. This relationship may or may not involve marriage. The cycle breaks down into the honeymoon phase, tension-building phase, violence/acute explosion phase. Therefore, violence does not ... END_OF_DOCUMENT_TOKEN_TO_BE_REPLACED
Pages: 3       Words: 644
View Sample

Family violence is defined as the intentional and systematic use of Violence and abuse to create fear and control the victim’s behavior (Loney-Howes et al., 2021). Multiple forms of abuse characterize the experience resulting in physical and sexual, and psychological damage, forced social isolation, economic deprivation, or behavior that causes the victim to live in ... END_OF_DOCUMENT_TOKEN_TO_BE_REPLACED
Pages: 4       Words: 921
View Sample

Bilgel, Firat. “State gun control laws, gun ownership and the supply of homicide organ donors.” International Review of Law and Economics 63 (2020): 105925. Retrieved from; https://www.sciencedirect.com/science/article/abs/pii/S0144818820301381. Accessed on 21st February 2022 The transplanting paradox theory is evaluated in the United States in this investigation. Count data models are advocated by distributional and concealed notions of weapon murder and ... END_OF_DOCUMENT_TOKEN_TO_BE_REPLACED
Pages: 5       Words: 1332
View Sample

Racism has been practised and experienced by people of mixed colours living in different regions where their place of origin is perceived as insignificant. Black, Indians, Chinese and other races that are not White have always been subjected to racist prejudices. These discriminations are practised openly whereby the government take part in them; the perpetrators ... END_OF_DOCUMENT_TOKEN_TO_BE_REPLACED
Pages: 4       Words: 873
View Sample

How Racism Affects the Criminal Justice in the United States

Racism is the belief that people from some races are inferior to others. It also refers to aspects of society that prevent some people belonging to a particular race from having the same privileges and opportunities as other races. Racism is castigated by cultural, historical, religious, economic, and demographic reasons. Although racism is highly condemned, ... END_OF_DOCUMENT_TOKEN_TO_BE_REPLACED
Pages: 5       Words: 1145
View Sample

According to the Australian Institute of Health and Welfare (2018), family violence is a major health and welfare issue across all ages and socioeconomic and demographic groups, but it mostly affects women and children. While there is no single cause that results in domestic violence, several risk factors have been associated with perpetrators and victims ... END_OF_DOCUMENT_TOKEN_TO_BE_REPLACED
Pages: 8       Words: 2149
View Sample
Need a plagiarism free essay written by an educator?
Order it today