We use cookies to provide you with the services at our best. By continuing to browse the website, you accept it. More.
Need a perfect paper? Place your first order and save 5% with this code:   SAVE5NOW
Home › Business › Japan Currency Finance Project

Japan is a country located on the East Coast of Asia. It has a population of 126.3 million people. The country, which covers 377 835 sq. km, has a $5.7 trillion and economic freedom score of 74.1, which makes it top ten among the Asian-Pacific region. Japan is one of the economic powers around the world since it is considered to have one of the largest and most developed economies (Currency History, 2015). The country’s economy rose after World War II because Japan was able to create cheap textile and later advanced to manufacturing and services and still accounts for most of the country’s employment and GDP.

Over 40% of the manufactured products in Japan are exported to other countries. These products are mainly shipped to:

Japanese Yen (JPY) is currently the third most commonly traded currency in forex trade, where the first is the U.S. dollar and the second is Euro. Japan is one of the few countries that use the floating currency regime. Thus, the prices of imports and exports determine the most of the rate of foreign exchange. This policy has been in existence since the 1970s. Thus, the country has experienced massive fluctuations in the exchange rates. The value of the Japanese Yen around the 1940s was such that $1 was equal to ¥360. However, between the 1950s and 1960s, Japan underwent many adjustments due to the superfast growth of manufacturing industries (Meltzer, 1986). And by the 1980s, the system burgeoned due to capital inflows and foreign investments. The exchange rates fell from $1 equal to ¥360 to $1 was equal to ¥227 (Currency History, 2015). In 2008, during the economic crisis, the JPY exchange rates went up. Japan was able to reverse the situation using foreign exchange interventions. The exchange rates are not fixed and keep varying based on changes in demand and supply.

Japanese Yen was invented in the 1870s. Before JPY, Japan used Mon (文) as the currency system from the 1330s up to the 1870s, and it continued to co-circulate with Yen currency up to 1891 (Fujii, 2013). The coins were made of 99% copper and had a hole in the middle. The coins were invented to replace barter trade and provided unit coins suitable for business, just like the Chinese coins.

Determination of the Exchange Rates and the Responsibility of the country authorities.

The current currency is JPY which the Bank of Japan controls. The supply of Yen is determined by the forces of demand and supply in the market. The higher the demand for Yen, the higher the exchange rate, which in turn increases the value of the Yen. This demand is due to increased trading activities between countries which increases the foreign exchange. Japan is highly globalized and manufactures products that have high demand worldwide (Meltzer, 1986). Thus, the more sales of products and services to other countries, the higher the exchange rates. Also, the vice versa is true where fewer sales result in less demand for the Yen, and thus, the exchange rates go down. The JPY is managed and controlled by the Bank of Japan. The institution ensures there is no high inflation or deflation, which would have a negative effect on the economy.

The goods are measured indexes value, while the services are measured in their monetary value at that time. These goods mainly consist of; machinery, chemicals, automotive, electrical machinery, manufactured goods, and others (Okubo, 2021). On the other hand, the services are inclusive of travel, transport, and property charges. The goods have more positive results than the services due to the high demand for goods and offering free services as incentives. The current account balance is increasing, which is a sign that the country is more stable economically. 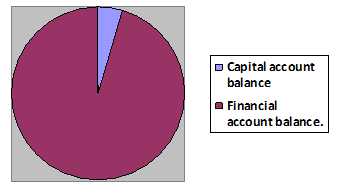 Japan’s 10-year BOP situation from 2011 up to 2021 has an average that indicates a gradual increase and a mean of over ¥1000 billion. The growth is an indication of a more stabilized economy. The most recent value is ¥1820.4 billion, which indicates that Japan can effectively meet the market expectations.

Exchange rate to U.S. dollar at two-time points – the beginning of last year and this year.

The Direction and magnitude of Change in Exchange Rate.

It is important to note that as the value of one currency goes up, the other goes down. In this case, the projection indicates a future depreciation in Yen, meaning that the dollar’s value will go up by the same rate (5.032%).

The exchange rate change in the past ten years.

Comparison of inflation rates of the U.S. and Japan.

Japan’s inflation level in 2020 was at its lowest, with a rate of 0.46%. This rate was very low compared to the United States inflation rate, which was at 1.25%. This indicates that the value of the U.S. dollar was going down in 2020 while the value of the Yen remained higher at a considerable rate. As noted earlier, the Japanese Yen is among the most potent currency in the world. The values indicate that the Japanese Yen currency is powerful, stable, and is being effectively controlled.

In the findings of direction and magnitude found using calculations, the Yen value falls by 5.032% and the value of the dollar increases. On the other hand, the inflation levels collaborate when Japan’s inflation rate was -0.01% while that of the U.S., the value was at 1.25%.

This indicates that the RPPP in regard to the U.S. dollar is -1.24%. This value means that the Yen will gain value at a rate of 1.24% in respect to the U.S. dollar. Thus, the economy of Japan seems to be gaining power and stability compared to that of the United States economy. With a more stable currency, Japan has a higher purchasing power than United States values. This can be explained by the consumer price index, which is the primary determiner for inflation levels. A region with high inflation indicates that the cost of goods is high in the area, and when it is low, the price of products is more favourable. Thus, comparing the inflation rate between the United States and Japan, it is clear that Japan has more purchasing power compared to the United States.

Recent Prediction of forwarding Inflation Rate or Future Rate and Source of Information.

Trading Economics (2021) includes future forecasts of inflation rates up to 2023. The estimated inflation rate is around 0.50 in a year’s time. “In the long-term, the Japan Inflation Rate is projected to trend around 0.70 percent in 2022 and 1.40 percent in 2023, according to our econometric models.” (Trading economics, 2021).

Fujii, N. (2013). The history of Japanese copper coins: Illustrated from the collection of the Currency Museum of the Bank of Japan. Journal of the Oriental Society of Australia, The, 45, 77-92.

Meltzer, A. H. (1986). Monetary and Exchange Rate Regimes: A Comparison of Japan and the United States. Cato Institute Journal. https://www.cato.org/sites/cato.org/files/serials/files/cato-journal/1986/11/cj6n2-14.pdf

Want an essay on the same topic?
Order an essay from our professional writers and get an essay written from scratch in just 3 hours. We work only with the best academic writers.
Place an order
Related Topics
Finance
Japan
Globalization
Economic Overview
Balance Of Payment

Culture is the collection of various characteristics that distinguish one organization from another. Furthermore, a collective understanding of people’s minds brings the uniqueness of one company with another firm (Hironimus, 2019). Culture is also defined as a group of various values and behaviors believed to generate success in an organization. Culture can also mean a genuinely ... END_OF_DOCUMENT_TOKEN_TO_BE_REPLACED
Pages: 6       Words: 1531
View Sample

The belt and road program is a component of China’s strategy to become the most powerful country in the world. The belt and trade program was initiated in 2013 by president Xi Jinping. It is structured into two main parts: the Silk Road economic belt and the 21st century maritime Silk Road (Dallas, 2019). The ... END_OF_DOCUMENT_TOKEN_TO_BE_REPLACED
Pages: 8       Words: 2086
View Sample

Introduction The U.S. is privileged to have more than 45,000 floricultural supermarkets and garden centers that sell flowers and floral decorations. 30% of the overall floral market is often made of freshly cut flowers. The floral shops earn an average income of 125,000 dollars and average sales of about 300,000 dollars every year (Adebayo et ... END_OF_DOCUMENT_TOKEN_TO_BE_REPLACED
Pages: 3       Words: 627
View Sample

Description Foodpanda is one of the significant online delivery organizations that are well known and developed in Hong Kong. After its establishment in 2014, this organization has managed to expand its operation in various parts of Hong Kong (Sharma, 2017). It was ranked as one of the iconic delivery service organizations in Hong Kong as ... END_OF_DOCUMENT_TOKEN_TO_BE_REPLACED
Pages: 7       Words: 1914
View Sample

Canada’s housing problem has emerged as a national issue of concern. For decades, housing prices have outpaced wage growth, and as a consequence, both buying and renting a house has become unaffordable to an increasing number of Canadians. According to a May 2021 research by Oxford Economics, houses in Canada are 34% more costly than ... END_OF_DOCUMENT_TOKEN_TO_BE_REPLACED
Pages: 5       Words: 1225
View Sample

Introduction Organizational culture is responsible for shaping the climate in which businesses are run and may significantly influence their long-term success or failure. In the hotel business, as in any other, this is as true as any other. As they are developed and maintained, all staff employees should be made aware of their core values, ... END_OF_DOCUMENT_TOKEN_TO_BE_REPLACED
Pages: 11       Words: 2879
View Sample
Need a plagiarism free essay written by an educator?
Order it today