We use cookies to provide you with the services at our best. By continuing to browse the website, you accept it. More.
Need a perfect paper? Place your first order and save 5% with this code:   SAVE5NOW
Home › Social Sciences › Effects of Music and Time on Self Comfortability (Anxiety)

Effects of Music and Time on Self Comfortability (Anxiety)

One hundred Brooklyn College students participated in a research study testing the effect of tense music and mellow music on timed and untimed tests. The test aimed to see if there was any significance to how they affected comfort levels and anxiety. The study used methods based on previous research by Cassidy & Macdonald (2009) and Tsui & Mazzocco (2006). The participants were sent a google form to fill out. The first section of the form contained two links: one to either TextTwist 2 or TextTwist Unlimited, and a Google Drive MP3 link for a 3-minute loop of either the tense song (labeled “Background Music T”) or the mellow song (labeled “Background Music M”). After completing the game, participants proceeded to the next section of the form. They were asked to upload a screenshot of their results screen for proof, then complete a questionnaire rating their anxious feelings about the game. The results did not indicate any significant relationship between the respondents listening to tense and mellow music in both timed untimed tests on self-reported comfort levels(anxiety). However, individuals listening to mellow music outperformed the tense music respondents.

Its common knowledge that music and timed tasks can affect performance and anxiety. However, there isn’t much information on how these two can interact in helping to reduce or increase anxiety during these tasks. Understanding this can help provide new ways to reduce stress for students during exams or other task scenarios. The concepts being studied are anxiety and the impact of music and timed tasks on it. Anxiety can be described as stress and worriedness a person faces during tasks that, as a result, can potentially lead to poor performance. (MedlinePlus, 1998). In this experiment, we hypothesize that:

1The main effect of the timer being present; participants will have more anxiety when playing a word puzzle game.

2) The main effect of the different moods of music; participants will have less anxiety for serene music and more anxiety for tense music when playing a word puzzle game

3) There will be a significant interaction effect between the presence of a timer (timed, untimed) and the mood of music (serene, tense); participants listening to tense music will always end up having more anxiety than those listening to calm music regardless of a timed or untimed puzzle game.

4) Alternative hypothesis is mellow music does not have any effect at any effect and a person’s mood pre-test was the main driving force behind their anxiety regardless of whether the game was timed or not. Another alternative is that mellow music can increase anxiety but only during the timed game.

Most individuals feel anxious when confronted by a difficult situation at school, work, before making a significant decision, or when taking a test. Anxiety can help people cope by offering them a jolt of energy or allowing them to concentrate. However, anxiety can be persistent for people who suffer from anxiety disorders and can be overwhelming. It can make you sweat, cause your heart to race and feel restless and tight. It’s likely that it’s a natural reaction to stress and can sometimes be paralyzing (MedlinePlus, 1998).

Cassidy and Macdonald (2009) conducted experiments on self-selected music, and experimenter selected music on participants conducting tasks. They found out that those who chose their music were more relaxed and performed better than those who listened to the experimenter’s music. These results helped them conclude that the high arousal sounds of music chosen by the experimenter supported information distraction theories lowering performance. These results can help us understand that choosing the music ourselves can have certain effects. Therefore, we wanted to observe how the same effect would interact with a timed test.

Tsui & Mazzocco (2006) focused on anxiety and performance for math tests in gifted students. The tests found that students performed worse on the timed tests than the untimed ones. However, they found out that this was only significant when the timed test came before the untimed test. They concluded that while some results were significant if the students were given practice tests before the timed one, there was no difference between their performance and the untimed test alone. Findings from the research helps show that timed tasks can put more stress on people than untimed ones and that knowledge will help us test how music can interact with this.

The participants in this study were randomly recruited from social media and blackboard from the psychology department of Brooklyn College. There were (n=100) students for this study. The participants were not supervised by anyone and were not compensated for their work.

This study required the participants to have an internet connection and a working computer; the participants were instructed to go on to a website to run the experiment (APA). The participants were sent a google form to fill out. In the first section of the form contained two links: one to either TextTwist 2 or TextTwist Unlimited, and a Google Drive MP3 link for a 3-minute loop of either the tense song (labeled “Background Music T”) or the mellow song (labeled “Background Music M”).

After completing the game, participants proceeded to the next section of the form. They were asked to upload a screenshot of their results screen for proof, then complete a questionnaire rating their anxious feelings about the game (i.e., “I felt my heart rate increase playing this game,” “I would like to play this game again,” “I didn’t feel like I had enough time to complete this game,” “I had faith in my ability to complete this game,” etc.) on a Likert scale, 1 being “strongly disagree” and 7 being “strongly agree.” After completing the survey, they had to submit the form for evaluation.

The sum of each group’s anxiety report data was compiled and analyzed using a repeated-measures ANOVA and simple descriptive means using Ms. Excel 2016. There were two independent variables with two levels each. The first IV was the presence of a timer being timed or untimed. The second IV was the mood of the music being mellow or tense. The participants did not have the same experiment. The dependent variable was the participant’s self-reported mood.

Randomly selected respondents were n=100, with 40 males, 44 females, 9 non-binary, and 7 who preferred not to reveal their gender. The average age was 23yrs, with the range of age of participants between 15-51yrs. 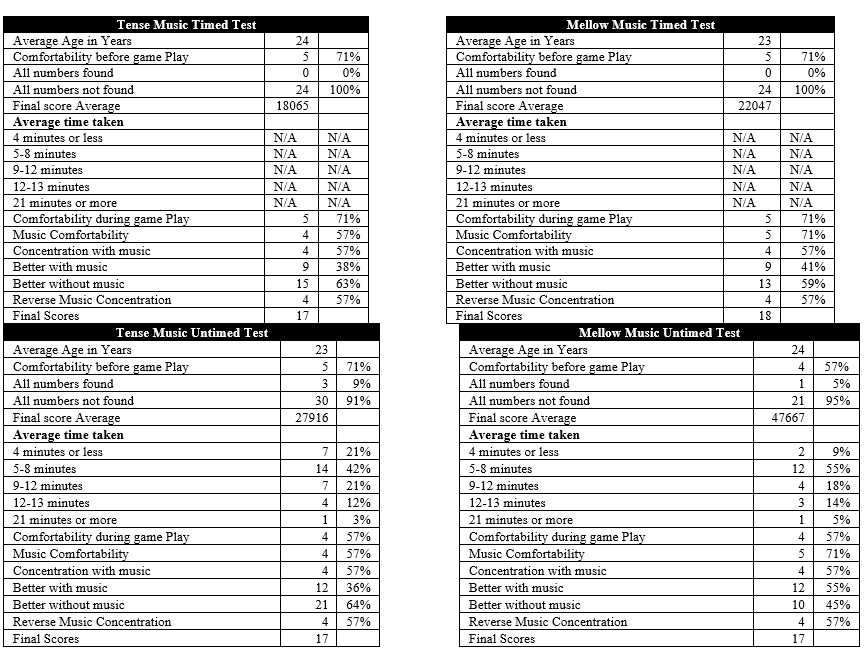 The tables above show a simple analysis of the respondents’ data with mean averages. The tense music timed data, and the mellow music timed tests do not show any significant change.

Respondents’ comfortability before and during the game on both data sets was 71%. Participants did not manage to find all numbers in both experiments. Music comfortability during the game was 57% for respondents listening to tense music and 71% for mellow music. This did not affect the averages for concentration (57% on both sets). However, only 38% preferred the test with tense music compared to 41% in the mellow music group. The average final score on tense music subjects was slightly lower (18005) compared to mellow music subjects (22047). 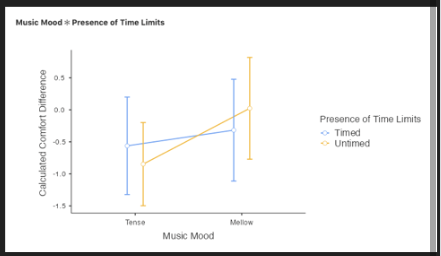 Music comfortability was also lower (57%) than mellow music (71%). It was fascinating to note that the tense music respondent finished the game faster than those listening to mellow music. This was also replicated in music comfortability. However, the performance average for mellow music was almost double that of the tense music group. In addition, people listening to tense music were less likely to conduct the test music with the same background music than those in the mellow music group. The Anova tests did not show any significance between the IVs and DVs. However, there may exist some non-significant interactions according to the graph, which could be more significant if more data is collected.

Even though the results did not indicate any significance between the variables, some limitations may have played a part in the final results. This includes our limited sample of Brooklyn college students; in the future, it should be tested on a more extensive and more diverse sample size. In addition, the experiment was also not done in a controlled setting which can affect the way the participants took the test; they might’ve watched the video another time or even written down the test answer. We did not counterbalance either, which can affect the study. Also, the data’s randomness did not consider the different IQs of different participants could have resulted in a biased sample population. Further tests can be conducted in a controlled environment with better equipment that can access user anxiety and comfortability instead of relying on the user responses only. In a within-subjects factorial design can also be helpful in upcoming studies.

Want an essay on the same topic?
Order an essay from our professional writers and get an essay written from scratch in just 3 hours. We work only with the best academic writers.
Place an order
Related Topics
Psychology
Effects Of Music On Self Comfortability
Timed Tests
Untimed Tests

Elizabeth Chin and Her Contribution to Social Design

Social design involves the use of specific approaches with the aim of providing solutions to societal problems with the help of interventions to change the lives of people. The social design addresses complex social issues. David Stairs and Eric Limarenko explore the concept of social design in their documentary “Digging the Suez Canal with a ... END_OF_DOCUMENT_TOKEN_TO_BE_REPLACED
Pages: 6       Words: 1599
View Sample

Introduction As a mathematics teacher, the most pressing need for and for a philosophy of education today is the urgent need to make the social nature of its aim plain in thought and successful in practice, as well as the social standards of worth for school operations. The purpose of education is to help people ... END_OF_DOCUMENT_TOKEN_TO_BE_REPLACED
Pages: 7       Words: 1893
View Sample

This paper will propose a classroom for a teacher in a highly diverse school, in terms of physical appearance, attitudes, instructional practices and cultural appreciation. This paper will focus on how the classroom should look like, and how the teacher should structure the classroom in a way that makes the best use of classroom resources ... END_OF_DOCUMENT_TOKEN_TO_BE_REPLACED
Pages: 4       Words: 1004
View Sample

How COVID-19 Has Impacted My Organization on Social Workers

Abstract This paper aims to present how coronavirus has changed perception of the general population on social workers, as well its general impact on social work practice. Discussed is an insight into how social work was before the outbreak of the novel coronavirus (covid19). The paper will focus on the different impacts of covid19 on ... END_OF_DOCUMENT_TOKEN_TO_BE_REPLACED
Pages: 11       Words: 2910
View Sample

Introduction For decades, the question of whether democracy and Islam are compatible has lingered. Numerous western and Islamic intellectuals have conducted extensive research and published their views on whether or not Islam is compatible with democracy. However, the situation remained unresolved for the time being. Numerous experts believe that democracy and Islam should have had ... END_OF_DOCUMENT_TOKEN_TO_BE_REPLACED
Pages: 6       Words: 1576
View Sample

For many minority groups, the Civil Rights Movement signified that their fights against racial inequity were now being confronted. Many people who were freed from enslavement would not have classified themselves as liberated for decades after the Emancipation Proclamation was written and the slaves were declared “Free.” They depict a period marked by oppression, bigotry, ... END_OF_DOCUMENT_TOKEN_TO_BE_REPLACED
Pages: 7       Words: 1735
View Sample
Need a plagiarism free essay written by an educator?
Order it today