We use cookies to provide you with the services at our best. By continuing to browse the website, you accept it. More.
Need a perfect paper? Place your first order and save 5% with this code:   SAVE5NOW
Home › Business › Effect of Oil Crisis on the Local Economy of Caracas, Venezuela

Effect of Oil Crisis on the Local Economy of Caracas, Venezuela

Over the past years, petroleum production in Venezuela has significantly impacted its economy and people’s livelihood. Aljazeera reports that oil comprises more than 90 percent of Venezuela’s export revenue (par. 2). According to an economic consultant based in Caracas, the country risked generating less than $8 billion export revenue in 2020, a significant decline from 2019’s $25 billion (Pons and Armas par. 3). In addition, Venezuela featured among the most vulnerable major oil producers on its microeconomic situation after oil prices collapsed in 2014 (Monaldi 6). The increasing effect of the oil crisis in the country has significantly affected various regions within Venezuela, economically, socially, and politically. This paper examines the effect of the oil crisis on the local economy of Caracas in Venezuela. The study will rely on key economic and economic-related factors that can indicate the effect of the oil crisis in this local region. Reverberate

The oil crisis has caused adverse effects on the country and the neighboring regions due to environmental degradation. Leadership in Caracas has led to the significant deterioration of the environmental standards despite paying lip service for ecological conditions (Berg 1). The PDVS, one of the state-owned oil companies in the country, announced in 2016 that it would not report oil spill cases, as President Nicolas Maduro planned to create an expansive oil mine in the region (Berg 1). These advances posed a significant social and economic threat to Venezuelans living in Caracas and the neighboring regions, especially those who rely on fishing activities in the waterways near the Caribbean. These individuals depend on fishing as a source of livelihood to educate their children and pay daily expenses such as food, house rent, and other basic needs. The Center for Strategic and International Studies reports that Venezuela’s oil crisis has caused the severe environmental impact, including coastal spills, which have devastated marine biodiversity (Berg 4). The crisis drive-by mismanagement of oil infrastructure in the country has caused unrestricted flaring and ruptures of inland pipelines that release hazardous gaseous to the communities living around the region (Berg 4).

The oil crisis has escalated negative economic relations between Caracas and other countries or regions. Washington has continued to escalate sanctions against Caracas in recent years, which has affected Maduro’s administration through a decline in the national income (Cheatham et al. 3). Sanctions usually undermine economic development, as the region does not have enough financial capabilities to develop key government and private sector infrastructures. For instance, sanctions would redirect funds and support from donors who would like to improve or develop transport system in the region that could have accompanied key economic benefits such as easy access to services and good delivery, increased employment opportunities, and economic indicators that can encourage local and domestic investment in the Caracas. Therefore, the oil crisis driven by poor leadership and bad economic policies has adversely affected Caracas’s economy.

The Oil Crisis and the Caracas Stock Exchange

One of Caracas’ economy’s key indicators, and Venezuela at large, is the Caracas Stock Exchange. Key data on the Caracas Stock Exchange Stock Market Index in figure 1 indicate a significant trend between 2017 and 2021. Between 2017 and 2019, the Stock Market Index shows a constant change where it started to increase significantly to 6614 VES in 2021. We can relate changes in the region’s stock market index with the oil crisis and note that the crisis undermined the growth in the past years, as the index reported an increase only after 2019. The stock market’s performance is among the key indicators that can attract various types of investment since investors will only invest in regions that can attract high investment and economic benefits. Since Caracas is Venezuela’s capital city, the region tends to report insignificant economic growth as investors divert their resources to other potential regions. Such decisions deprive the region of sufficient and reliable infrastructural development projects that can improve Caracas residents’ livelihood. 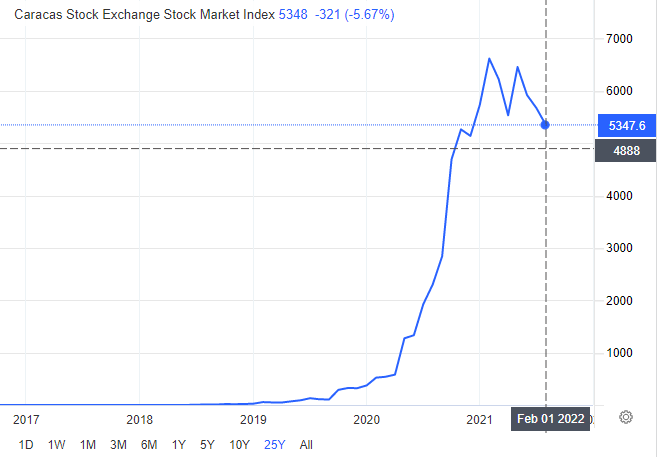 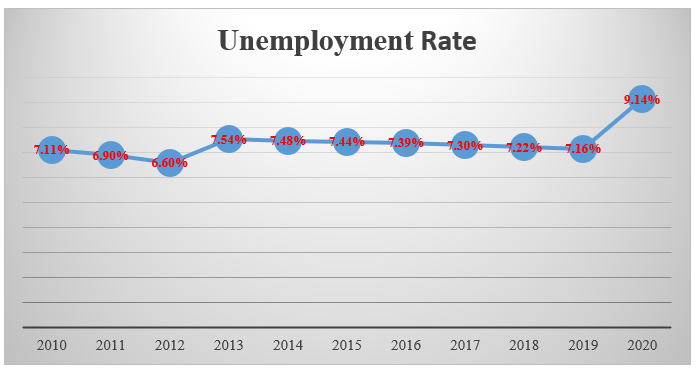 The study also examined the effect of the oil crisis on the climate and environmental changes in Caracas. Based on reported data in Córdova’s study, the study found that the oil crisis has caused an adverse detrimental effect on climate change and environmental degradation in Caracas. The literature highlighted earlier noted that poor governance and accountability from environmental threats such as oil spills and rupture of the pipeline had excessively increased environmental degradation in Venezuela (.Berg 4). Figure 3 shows vegetation index patterns in Caracas city, where urban areas without vegetation covered a significant area in the region in 2001. However, Eulogio et al. report that the vegetation index has significantly declined in the region (10). Environment degradation affects individuals’ lives in the region due to the decline inhabitable environment that can improve individuals’ health. 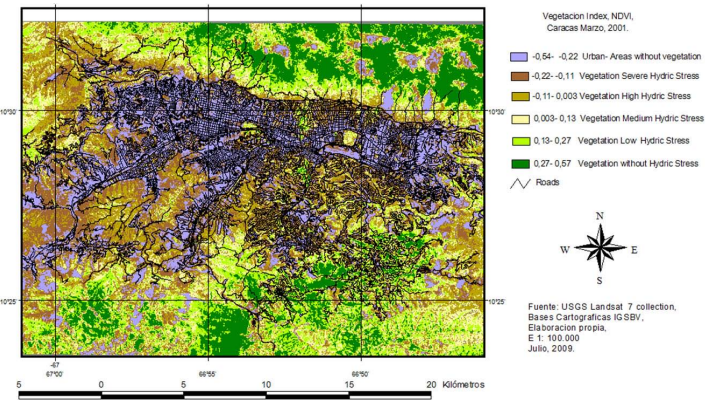 Figure 3 shows the trend of the Camatagua Reservoir levels between 1986 and 2000, with four successive year predictions. The trend shows an overall decline over the years while the study predicts a sharp decline after 2000. This decline indicates a change in climate that has led reduction in water levels in the reservoir. Chemnick reports that Venezuela has about 50 to 60 percent rainfall, less than the annual average e rainfall received between 2013 and 2016 (par. 6). Rainfall decline led to water and electricity rationing since the country highly relies on hydropower (Chemnick par. 6). Rainfall shortages in 2016 led to a decline in water levels at the Guri Dam in Bolivar, which is one of the largest hydropower stations that the country depends on, leading to power outages in Caracas for several months (Chemnick par. 6). Therefore, environmental effects caused by oil spills and rupture of oil pipelines could be among the key cause of the increasing effecting of climate change and environmental degradation. These effects tend to negatively affect the residents living in Caracas, especially in cases of power outages since businesses and organizations depend on electricity to run their daily operations. 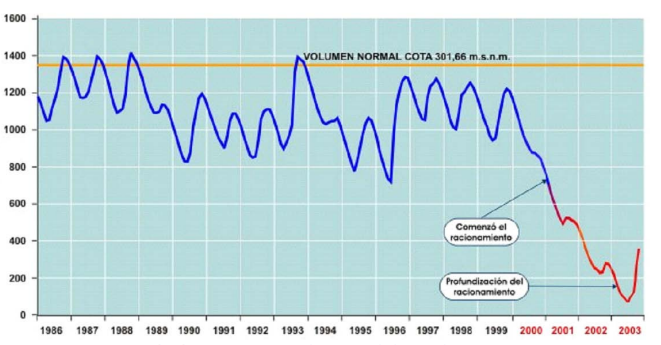 Throughout this study, we have established how the oil crisis in Venezuela has adversely affected the local economy in Caracas. Poor governance and ineffective policies are among the drivers that escalated the oil crisis in Venezuela, subjective Caracas and its residence to lack of economic opportunities, environmental degradation, increased unemployment rate. The crisis prevents investors from investing in the region towards key infrastructural development such as transport systems and businesses to improve people’s livelihood. The oil crisis has also led to a lack of accountability on environmental issues such as oil spills and breakage of pipelines in the mainland and water bodies, affecting people relying on fishing activities as a source of livelihood. Besides, the oil crisis related to increased unemployment in the regions due to lack of employment opportunities deprived by issues related to the crisis, such as diversion of Investment funds.

Despite the findings, the study faced various limitations that affected its data collection process and preparation. First, I had challenges in identifying data related to economic development in Caracas despite having a significant association with the oil crisis. For example, I used the country unemployment rate data since I could not find data related to Caracas unemployment. Other challenges that I encountered in identifying variables closely related to the escalating oil crisis in Venezuela and Caracas. However, I delved deep into previous scholarly materials to establish key variables. It is important to note that these limitations do not affect the validity and reliability of the study’s findings and discussions since they use reliable sources to develop key findings.

Chacón-Moreno, Eulogio, et al. “Impacts of Global Change on the Spatial Dynamics of Treeline in Venezuelan Andes.” Frontiers in Ecology and Evolution 9 (2021): 74.

Monaldi, F. (2015). The impact of the decline in oil prices on Venezuela’s economics, politics, and oil industry. Center of Global Energy Policy

Want an essay on the same topic?
Order an essay from our professional writers and get an essay written from scratch in just 3 hours. We work only with the best academic writers.
Place an order
Related Topics
Economics
Caracas Stock Exchange
Caracas
Oil Crisis
Venezuela

Capital structure is the way firms choose to finance their investments and assets through some combinations of debts, equity, or internal finances. Ramli et al. (2019) give a brief definition of capital structure, also known as the financial structure, and deal with the organization’s investments activities using the owner’s immediate securities or equity and debts. ... END_OF_DOCUMENT_TOKEN_TO_BE_REPLACED
Pages: 8       Words: 2166
View Sample

Small and medium enterprises have been discovered to have a shorter lifespan during the economic depression. High corporate capital, inadequate financial resources, and limited technical and managerial competencies contribute to the challenges (Beck-Kunt et al., 2005). Latham (2009) and Robbins & Pearce II (1993), claim that small and medium-sized firms are most susceptible to economic ... END_OF_DOCUMENT_TOKEN_TO_BE_REPLACED
Pages: 10       Words: 2661
View Sample

This critical mirroring is enthralled on my leadership encounter through which I propose areas for my improvement. I am also using hereto leadership concepts and theory concepts to evaluate and examine the leadership exposition that I am introducing. Leadership is an activity or sequence of actions aimed toward group objectives; it is an incessantly exhibited ... END_OF_DOCUMENT_TOKEN_TO_BE_REPLACED
Pages: 16       Words: 4267
View Sample

What Impact Did Increasing Global Economic Integration Have on Inequality?

Introduction In 1944, countries had an agreement encompassing monetary administration and created commercial and financial association rules.[1]. The plan was a setoff unified regulations and policies that offered a framework necessary to develop fixed international currency exchange rates. However, the system collapsed in 1971, and there was an introduction of neoliberalism that intended to bring ... END_OF_DOCUMENT_TOKEN_TO_BE_REPLACED
Pages: 13       Words: 3433
View Sample

After 1945 which marked the end of the world war, different countries embarked on their countries developmental strategies. Based on Asian countries, most of them were colonized, which led them to experience various economic problems. The majority of the citizens had migrated to the towns searching for the good life, leaving rural areas without development. ... END_OF_DOCUMENT_TOKEN_TO_BE_REPLACED
Pages: 4       Words: 1094
View Sample

Executive Summary A significant percentage of firms in the contemporary world are battling with consistent client involvement in addition to continuous growth in sales volume. Consequently, a marketing plan is essential since it specifies a company’s advertising approach for the eventual achievement of organizational financial goals (Srimek, Pranee, Suwandej, and Saisama, 2022). The marketing plan ... END_OF_DOCUMENT_TOKEN_TO_BE_REPLACED
Pages: 13       Words: 3480
View Sample
Need a plagiarism free essay written by an educator?
Order it today