We use cookies to provide you with the services at our best. By continuing to browse the website, you accept it. More.
Need a perfect paper? Place your first order and save 5% with this code:   SAVE5NOW
Home › Environmental Issues › Climate Change as a Negative Externality

Climate Change as a Negative Externality

An externality is a situation in which the choice of production or consumption of a particular product involuntarily affects the utility of a third party (Chenkov-Shaw, 2019). An externality can either be negative or positive and the focus of this paper will be on negative externality. Climate is inevitably an example of a negative externality since it results from company production choices that lead to the buildup of greenhouse gases such as carbon dioxide, water vapor, methane, and nitrogen oxide. Also, some of these gases are poisonous leading to the degradation of the environment which in turn jeopardizes the utility of future generations.

Analysis of climate change as a negative externality

The above graph demonstrates that if left in the free market without regulations, negative externality goods experience higher productions. The argument is true since the private cost that businesses incur while producing coal at quantity QP is much lower compared to the cost the future generations will incur from the adverse effects (Chenkov-Shaw, 2019). To operate within optimal allocations, QS would need to be reduced until social and private costs match.

What can be done to solve the problem of climate change

Figure two below presents a graphical solution to the climate change problem. 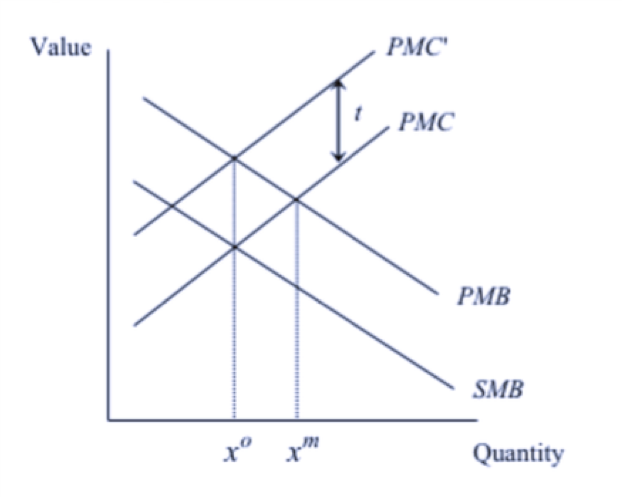 Through the application of a tax, producers can increase the private marginal cost (PMC) to meet the actual social cost (PMC) that the future generations will have to endure. As a result, the equilibrium quantity reduces from Xm to match the socially optimal level at X0. This strategy would act progressively as carbon tax while incentives are offered to larger carbon produces to reduce their waste level. Conversely, the offenders should be made to pay harsh penalties that will make it impossible for them to remain competitive in the market. Ultimately, the solution above would put a price on climate change as a negative externality forcing producers to comply by reducing levels. Besides the carbon tax, incentives can be offered for sustainable development, for instance by applying the Pigouvian subsidies. Such subsidies would use part of the carbon tax collected to incentivize the production of renewable energy. Therefore, the externality can be limited by taxing and incentives to promote the culture of sustainability among producers.

Want an essay on the same topic?
Order an essay from our professional writers and get an essay written from scratch in just 3 hours. We work only with the best academic writers.
Place an order
Related Topics
Climate Change
Negative Externality

Executive Summary of the U.S. and Canadian Emergency Management Systems

The most common catastrophes are meteorological weather as well as geological tragedies, which can devastate any portion of the United States. Their impacts could be restricted or extensive, predictable or unexpected. The magnitude of the damage could range from modest to major (Jones & Kovacich, 2019). Depending on the intensity of the disaster, it can ... END_OF_DOCUMENT_TOKEN_TO_BE_REPLACED
Pages: 5       Words: 1185
View Sample

Relationship Between Religion and Climate Change

There is broad consensus on environmental issues among the many religious groups. The different religions understand the need for caring for the environment, and their sacred writings urge believers to be guardians of the earth and its biodiversity. In May 2019, the All African Conference of Churches (AACC) and the United Religions Initiative (URI), Africa ... END_OF_DOCUMENT_TOKEN_TO_BE_REPLACED
Pages: 5       Words: 1229
View Sample

Dry weather that lasts for an extended amount of time is known as a drought. severe crop damage and water supply shortages. It also causes impacts on vegetation, animals, and people. It can also be called a long-term drought. period with less-than-average amounts of rain or snow in a particular region. There are leading causes ... END_OF_DOCUMENT_TOKEN_TO_BE_REPLACED
Pages: 3       Words: 665
View Sample

Glacier Ice and Its Impacts on Coastlines

Introduction Glaciers are essential elements of the world’s ecosystem and occupy 10% of the landmasses in the globe. They are enormous ice masses covering the ancient igneous and metamorphic rocks found in regions along the polls and at high elevations in mountains with permanent snow cover. These large ice bodies are found in areas like ... END_OF_DOCUMENT_TOKEN_TO_BE_REPLACED
Pages: 6       Words: 1592
View Sample

1.0 Introduction Carbon (greenhouse gas) emissions and management of energy have developed a major precedence in the process of making decision for organisation worldwide, with the firm European legislation framework being a key driving force (Giama and Papadopoulos, 2018, pp. 21-29). As a result, reducing energy demand and selecting solutions that result in low carbon ... END_OF_DOCUMENT_TOKEN_TO_BE_REPLACED
Pages: 14       Words: 3786
View Sample

Introduction Water scarcity is caused by either a lack of water or a lack of safe water. The majority of us take clean and safe drinking water for granted. In undeveloped areas, a reliable source of safe water may be difficult to come by. This is referred to as economic scarcity. It is possible to ... END_OF_DOCUMENT_TOKEN_TO_BE_REPLACED
Pages: 4       Words: 873
View Sample
Need a plagiarism free essay written by an educator?
Order it today