We use cookies to provide you with the services at our best. By continuing to browse the website, you accept it. More.
Need a perfect paper? Place your first order and save 5% with this code:   SAVE5NOW
Home › Business › Challenges Facing International Trade in Iran

International Trade is the practice of transferring products and services across countries. Almost a third of the world’s commodities and services are traded across borders (Akira,1972). This type of foreign trade benefits the international economy. Examples of common traded items are raw materials, clothings and machinery. Trading beyond national borders has risen dramatically (Akira,1972). This includes services such as international transportation and tourism as well as financial services like warehousing.

Iran is a global trading economy, not only an exporter of oil but also a country that buys and sells a wide range of goods (Khajehpour, 2001). During the peak of the oil price in 2006-2008, oil and gas played a big role in Iranian foreign trade (Murphy et al., 2020). Unlike many other oil-exporting countries, Iran’s economy is diverse. Iran’s economy is more resilient to volatility in other sectors also for instance agriculture, industry, petroleum and mining because the services sector accounts for more than half of the nation’s GDP. The petroleum sector is responsible for only approximately 18% of GDP, according to data (Murphy et al., 2020). Crude oil, natural gas, and petrochemical products are among Iran’s principal exports, all of which are produce from the petroleum sector. Broadcasting Equipment, Corn, Rice, Vehicle Parts, and Soybeans are Iran’s biggest imports. Iranian top trading partners include China, Turkey, United Arab Emirates, Germany, and India (Iran (IRN) Exports, Imports, and Trade Partners | OEC, n.d.). 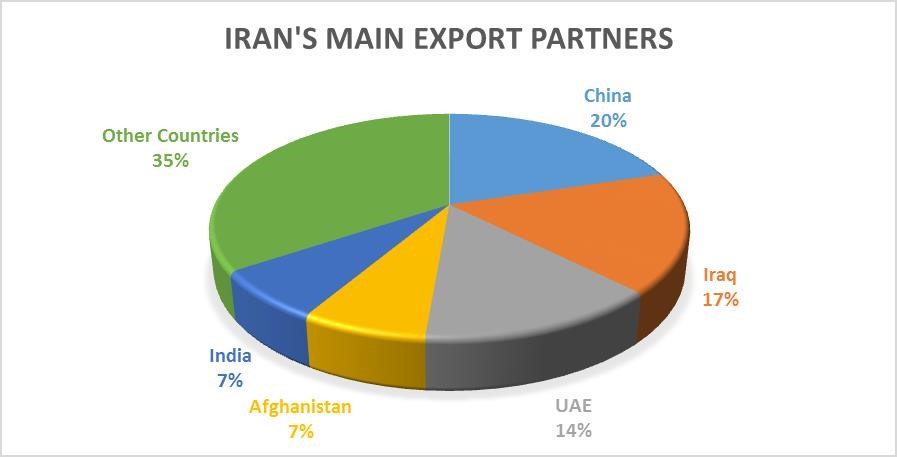 Iran was able to join the World Trade Organization (WTO) in 2005 after 10 years of political constraints with the United States, thanks to nuclear discussions with the European Union (EU). Iran’s international trade ties have fluctuated throughout the last 15 years, therefore its efforts to restructure its economic institutions have been regarded with mistrust on the world stage (Gilanpour, 2006). An analysis of the current developments in Iran’s foreign trade has revealed that economic sanctions, Cultural differences, unequal access to the markets, price fluctuations, and foreign laws and regulations are challenges facing global trade in Iran. This paper discusses the two major problems, economic sanction and cultural differences.

To keep up with the global economy, countries, and regions are continuously looking for innovative ways to increase export and import growth in commodities and services. While increased commerce assists in building new trade markets, it can also result in uncertainty in existing markets as a result of increased competition. As a result, many governments create trade barriers in order to protect their companies and countries. Furthermore, for political reasons, such as differences in policy objectives between nations, the governments of the senders may place limits on exports and imports. Sanctions are a form of a policy tool that is regularly utilized in international diplomacy and between countries’ political relations (Askari et al., 2015).

Economic sanctions are designed to affect a target nation’s government conduct, therefore they have become an important part of many international players’ policies, among them the United States (Fayazmanesh, 2003). There is little doubt that Iran’s human rights problems, nuclear ambitions, and suspected backing for foreign terrorists have all been highlighted by this policy instrument during the past few years. Iran’s principal exports-valuable gas and oil, also its sector of finance, have all been blocked by the United States because of long-standing disputes between the two countries (Fayazmanesh, 2003).

It has been 30 more than 30 years since the USA implemented the first economic sanction on Iran (Fayazmanesh, 2003). The implementation has been due to the differences in the political objectives between the two states. The effect of the sanction has hit hard the Iranian oil business, therefore resulting in a setback in their economy. A study by (Ghaderi, 2015) using the gravity model has shown that the US sanctions impacted on Iran’s trade flows. As the Us banned crude oil, which is the leading Iranian export product, many oil companies withdrew from the Iranian market in fear of losing access to the western markets. (Amuzegar, 1997) discusses this claim by demonstrating how the USA sanctions during the years 1995,1996 influenced various nations and companies to limit their trade relationships with Iran.

In (Grace and Smith, 2016), the concept of culture refers to the social interactions or communications and common ways of processing information among individuals who share a common set of beliefs and values. Culture develops over time, and it has done so steadily and steadily ever since. Commercial activity may be disrupted in some countries because of negative attitudes toward material culture. In Gandhi’s view, western technology and industrialization had a negative impact on human values and turned people into machines (Kalhor et al.,2014). Negative cultural beliefs and traditions have negatively impacted the growth of international trade in Iran.

There are many diverse components that have been linked throughout Iranian history and have been discovered in a single, integrated set in Iranian culture. Iranian culture is the product of the interplay between the country’s current, Islamic elements and its ancient, Islamic elements during its historical development (Golkarian, 2019). The cultural factors affecting the Iranian international markets include the language barrier, Traditions, customs and culture of the consumption of products, and Religion. (Li et al.,2021) says in order for international trade to grow, language and cultural barriers must be overcome. The more significant the discrepancies, the more expensive the trade will be. According to various studies, global firms prefer to do business with countries where the people speak the same language and have similar cultural norms(Li et al.,2021).

(Kalhor et al.,2014) studies the negative cultural factors affecting the export of Saffron from Iran. Saffron is considered the Iranians’ fifth non-oil exported product and Iran is considered the best exporter of saffron in the world. Despite sharing Lion’s share of the product’s market, Iran does not play a role in the determination of the global price for saffron. This is due to the ineffective Iranian Cultural factors such as packaging, advertisement, product consumption culture, and poor provision of information.

Thus, International trade is considered the leading governance of the world order. The global economy has benefited from international trade. This study focuses on the challenges facing international trade in Iran. The primary limitation of Iran’s participation in the global market is the economic sanctions. USA implementation of the Iranian sanction for a period of more than 30 years. The second challenge is the negative cultures. This has affected the market for Saffron which is one of Iranian’s major export. Other factors mentioned in the study are political Instability, price fluctuations, laws and regulations, and external debts among others.

Khajehpour, B., 2001. Iran’s economy: twenty years after the Islamic revolution. In Iran at the Crossroads (pp. 93-122). Palgrave Macmillan, New York.

Want an essay on the same topic?
Order an essay from our professional writers and get an essay written from scratch in just 3 hours. We work only with the best academic writers.
Place an order
Related Topics
Economics
Cultural Differences
Economic Sanctions In Iran
International Trade In Iran

Business ethics relates to controversial issues or ethical dilemmas faced by organizations. It often pertains to procedures and practices that enable the company to establish a trustful relationship with the customer. Business ethics also involves the study of the right business practices and policies relating to potentially controversial areas. Thus, it focuses on moral rules ... END_OF_DOCUMENT_TOKEN_TO_BE_REPLACED
Pages: 5       Words: 1181
View Sample

Introduction Kodak was among the greatest entrepreneurial success stories of the last century in photography. The company was founded in 1888 by Eastman George. It only took eight years to skyrocket its revenue to over $10 billion, becoming the global commander in the photography and film industry. (Melvin, 2018). In the three decades that followed, ... END_OF_DOCUMENT_TOKEN_TO_BE_REPLACED
Pages: 7       Words: 1683
View Sample

Revenue, evidence, numbers, intuitions, expenses, newest trends, item purchases, employee productivity, critical information, evaluation, and far more, in my perspective, are all brought into decision-making at all ranks of a business. Forecasting, in particular, is an excellent concept since it serves an essential purpose in decision-making (Kohl). It is a method of forecasting or predicting ... END_OF_DOCUMENT_TOKEN_TO_BE_REPLACED
Pages: 3       Words: 602
View Sample

Impact of Tourism on Economic Development

Tourism does not solely involve the movement of individuals from their homes or their country to visit other recreational facilities. Still, it is a cultural, social, and economic phenomenon that involves the movement of individuals to countries for business or personal purposes. Besides just the basic concept of movement, tourism comes with a package of ... END_OF_DOCUMENT_TOKEN_TO_BE_REPLACED
Pages: 3       Words: 671
View Sample

Qubit Plead With a Hacker To Return Stolen Funds

Introduction Qubit is a decentralized finance platform. It involves trading cryptocurrency coins to individuals by offering a platform to transact. This is done via the company’s Qbridge protocol, which has proven to be secure and flawless in service delivery for some time now. However, on the evening of twenty-seventh January 2022, it announced a breach ... END_OF_DOCUMENT_TOKEN_TO_BE_REPLACED
Pages: 3       Words: 606
View Sample

The Interview With Sahil Chhikara

Executive Summary The purpose of this report is to define an interview conducted on March 3, 2022, with Sahil Chhikara, an Engineer at ELK Logistics, to gain necessary knowledge about how a business operates, how it operates within an organization, and how it contributes to the provision of special services to customers. It guides on ... END_OF_DOCUMENT_TOKEN_TO_BE_REPLACED
Pages: 12       Words: 3057
View Sample
Need a plagiarism free essay written by an educator?
Order it today