We use cookies to provide you with the services at our best. By continuing to browse the website, you accept it. More.
Need a perfect paper? Place your first order and save 5% with this code:   SAVE5NOW
Home › Humanities › Guernica Painting by Pablo Picasso, 1937 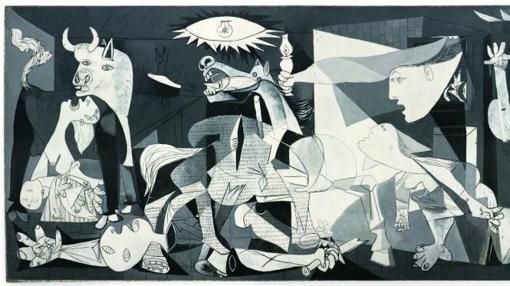 Guernica by Pablo Picasso is a well-known painting representing the bloody episodes and tragedies of the Spanish civil war (Picasso et al., 1956). The painting shows the pain and suffering innocent civilians encounter in war. The painting has gained a significant monumental status, used as an anti-war symbol, and became a perpetual reminder of the tragedies of the Spanish Civil war. On April 26, 1937 evening, the historic German military aviation (the Condor Legion of the Luftwaffe) dropped bombs in Guernica town, which claimed many civilian lives (Picasso et al., 1956). The bombing was a test of Junker planes that Adolf Hitler planned to attack Europe. The bombing turned into a massacre that claimed 2000 lives (Picasso et al., 1956).

The Guernica painting is a representation of a bombed interior of the town. Reading the printing from right to left, we can see a man overwhelmed by flames, two women, of whom one drags on with difficulty and the other has a lamp that tries to escape, a screaming horse, a fallen man, a bull, symbol of offended Spain, and a screaming mother holding a dead child (Picasso et al., 1956). Animals are used since they are significant characters in Spanish culture. They are used to represent their faithfulness to humans, sharing fates. The bull represented the onslaught of Fascism, while the horse represented the people of Guernica. The bombing and the war used to happen in the evening. The war entered homes and stables, not sparing anything, including animals, women, and children. The use of simple domestic objects such as lamps is proof of the violations and fragile experiences daily. The lamps are lit since the war takes place in the evening, when everyone is home, including animals, in the belief of being protected and safe.

Considering the linguistic level used in the Guernica painting, the artist uses a summary of the epic stylistic devices such as the aptitude, which shows objects in their lateral and frontal aspect, the juxtaposition of figures with volume and flat figures, and the reduction of color (Damian & Simonton, 2011). Surrealist, cubist, and expressionist forms are also present in the Guernica painting.

The element of painting where the stare is focused is brutal. The gaze is on the left, where a screaming mother holding a dead child. The mother is suffering pain from losing her innocent child. Her mouth is wide open with her neck stretched, showing that she is screaming and in pain. She cries as she faces upward (Ray, 2006). The screams and cries are prayers for help and condemnation: the attackers came from heaven. The corpse represents an innocent body going through underserved pain. The baby is dead despite being innocent, the mouth is closed, eyes are dead, and the head is poured down. The mother’s cry contrasts with her silence (Ray, 2006).

From the interpretation of the painting, Guernica is an icon of modern art. It is an example of what art can contribute towards self-assertion that liberates all living things, including animals, and protects them from overwhelming forces like war, death, political crime. The painting utilizes linguistic styles such as the reduction of colors to show the starkness of the aftermath of the bombing. Therefore, paintings are reliable communicators of various communal aspects the way Guernica brings to the human attention the effects of the Spanish war.

Want an essay on the same topic?
Order an essay from our professional writers and get an essay written from scratch in just 3 hours. We work only with the best academic writers.
Place an order
Related Topics
Art
Pablo Picasso
Guernica
Painting

In modern times, the term romantic spikes imagery of sentimentality and love, however, the term “Romanticism” covers a wider meaning. It encompasses an array of development in art, literature, philosophy, and music starting from the late 18th and early 19th centuries (Forward). During the period of romantics, major transitions happened in the society, as dissatisfied artists and ... END_OF_DOCUMENT_TOKEN_TO_BE_REPLACED
Pages: 8       Words: 2006
View Sample

In the past of disclosure concerning personal identity, self and conflicting viewpoints have been raised. Some people believe that being personal is the mind that reasons; others will say self is always distinguishable with someone’s body; others right that conjuring an idea of inner self is not possible. In this paper, the theory will suggest ... END_OF_DOCUMENT_TOKEN_TO_BE_REPLACED
Pages: 10       Words: 2527
View Sample

Introduction Life in colonial America (thirteen colonies) involves studying how life was conducted in the age and day of colonial America. As a result, one has to consider the views of every party involved with settling and colonization. The perspectives involved range from slaves to merchants. When the colonists first entered America, there were minimal ... END_OF_DOCUMENT_TOKEN_TO_BE_REPLACED
Pages: 15       Words: 3911
View Sample

The Victorian period, from the rich rhythmic and imagery quality of Alfred Lord Tennyson to Christina Rossetti’s poetic transparency and commanding exploration of faith and loss, foreshadowed an innovative trend of poetry that was influenced by its romantic forerunners yet markedly different. The Victorian poets’ composition approach, language, style, and themes were inspired by various phenomena, such as ... END_OF_DOCUMENT_TOKEN_TO_BE_REPLACED
Pages: 5       Words: 1347
View Sample

Plotinus (c. 204/5 – c. 270 C.E.) founded Neoplatonism. After Plato and Aristotle, this ancient philosopher was a major influence on philosophy. Neoplatonism is the tendency of historians to divide history into “periods.” Using the term “Platonic renaissance” at this point means that Plotinus started a new chapter in the ritual’s development. This “newness,” if ... END_OF_DOCUMENT_TOKEN_TO_BE_REPLACED
Pages: 7       Words: 1653
View Sample

How does this song express an anti-imperialist and/or Pan-Africanist viewpoint? The song Get up Stand Up by Bob Marley is a song that expresses a Pan Africanist and anti-imperialist view point. The chorus of the song calls for blacks to come together and fight against white oppression and to come together as one to lift ... END_OF_DOCUMENT_TOKEN_TO_BE_REPLACED
Pages: 3       Words: 748
View Sample
Need a plagiarism free essay written by an educator?
Order it today