We use cookies to provide you with the services at our best. By continuing to browse the website, you accept it. More.
Need a perfect paper? Place your first order and save 5% with this code:   SAVE5NOW
Home › Science › Are Computer Games Narratives?

When computer games were being introduced, they mainly comprised of fun games to give a quality experience and lacked extensive narrative elements. Although the games had a small narrative part, they did not influence their success and it was isolated from the main aspects of the game. The need to offer better consumer experiences have prompted gaming companies to ensure consumers get cinematic experience. Currently, players can interact with characters and make choices that control the game’s plot. Most people believe that interactivity and storytelling cannot be achieved in video game writing. In their argument, narratives and computer games are different phenomena and their combination will create ineffective games. Also, they claim that different sequences between a game and a narrative cannot make them a joint phenomenon. Computer games are non-linear while narratives evoke an aspect of linearity through a sequence with events leading to each other. On the other hand, the argument supporting the inclusion of narratives in video games is that conventional game writers overlooked the aspect of realistic environments. Contemporary game developers believe that people will be more enticed to play games where they can influence the plot like in the real world. Narratives are important in video games as they term games more iterative and real, making the players feel more immersed.

Narration is possible in a video game as all aspects of a game are avenues of telling a story and provide a chance to make games more iterative. According to Maggs (2016), game writing is a form of narration whereby the reader acts as a player, and aspects such as the gameplay, the rules, the characters, and the environment can be used to tell a story. She further explains that storytelling makes video games more technical and collaborative and it improves their iterative nature. This means that with narration, game developers can utilize an iterative design process that enables the identification of problem areas and gain the information necessary to improve the game’s play experience. Games evolve after some time and having a narrative aspect is vital to achieving an experience that will keep players interested in the game’s improved versions. In this case, the narration is compatible with video games and it assists the developers to explore and create strategies on how to refine games to be more entertaining. Stone (2019) echoes the same by giving examples of video games that have successfully incorporated the aspect of narratives to improve the user experience. He gives an example of a video game dubbed life is strange where content is released in chapters and the player’s decision determines the outcome of the game. In this game, the player can make choices through dialogue and actions and the decisions made determine the gaming events and character outcome. This means that the inclusion of the storytelling aspect in games makes a player act as the backbone of the game structure instead of being a spectator of the character’s actions and decisions. Moreover, player interaction is encouraged due to the ability to impact the game’s flow and determine how the storyline takes shape. As such, the inclusion of narratives in a video game offers a narrative experience that is not found in mediums such as films and literature.

The inclusion of narrative makes the players feel more immersed and involved. Stargame (2018) explains that the structure of games has changed and players no longer skim through games in hours or days but play small sections for more than a month. He further notes that narrative is one of the aspects used to ensure payers continue to play the game and unlock all the levels. This means that players can play games for a longer period if they have a desire to know the events that will unfold next. Narration is the easiest and popular method of telling a story and it helps to make the game more exciting and ensures the plot is not in form of instructions on how the game is played. Shallow stories that existed in older games were only included to offer the game context and to explain the goal the players will achieve when they play. However, narratives have changed the gameplay perspective and developers create video games following a particular story. With more complexity and advancement being witnessed, detailed narratives have been termed as a vital facet to make games more exciting to play. Olson (2010) confirmed the exciting and immersive nature of narrative video games by carrying out research on why children play video games as shown in the figure below. 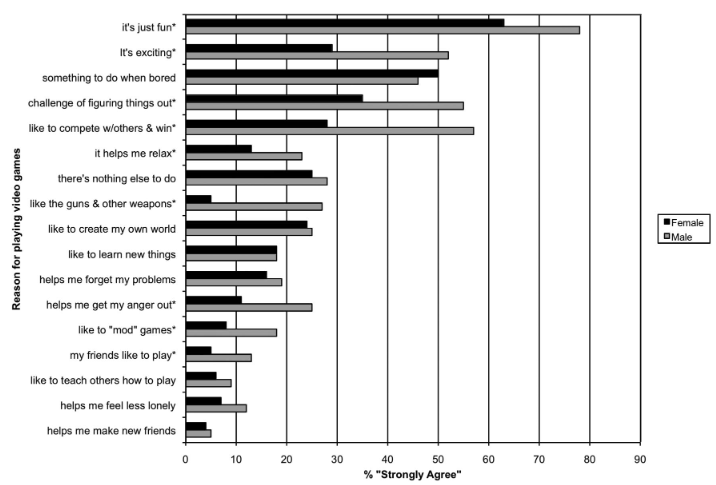 According to the research, a high portion of children played video games because they were fun, exciting, offered a challenge of figuring things out, and triggered a desire to compete and win. This means that a high portion of children are inclined to play narrative video games as they consist of aspects that they desire in video games. With narrative video games, storytelling will offer an exciting storyline built from one level to another, and the ability to control the events will offer a platform to choose the most favorable outcome for different characters. In this regard, narratives have revolutionized the gaming industry by creating exciting gaming episodes that attract a huge fan base.

So, video game writing should include narration as it renders video games more real and iterative as the player have the ability to control the storyline compared to games lacking this aspect. It also increases the players’ involvement since they are enticed to continue playing until they unlock all levels. Players are more inclined towards games with better user experience and which term them part of the storyline. Conventional video games have interactive elements such as gameplay, player choices, dialogues, and plot which writers can use to involve players. From this topic, video game writers should accommodate the idea of storytelling in their designs to create exciting games with improved user experience. During their inceptions, games were viewed as children’s toys but currently, there are games for the general public, a factor that necessitates new concepts to accommodate a more mature market. The gaming industry is evolving with the audience and the easier access to computing power in the contemporary world unlocks the ability of game developers to include detailed and complex narratives. In this regard, narratives should be embraced as they have improved video games and are projected to play a vital role in creating the next generation video games which will perfectly simulate the players’ environment.

Maggs, B. (2016). Explainer: the art of video game writing. The Conversation. Retrieved from https://theconversation.com/explainer-the-art-of-video-game-writing-60376.

Stargame, A. (2018). What game narrative is and what it means in casual games. Retrieved from https://medium.com/@alexstargame/what-game-narrative-is-and-what-it-means-in- casual-games-67f35c191424.

Stone, C. (2019). The evolution of video games as a storytelling medium, and the role of narrative in modern games. Retrieved from https://www.gamedeveloper.com/design/the- evolution-of-video-games-as-a-storytelling-medium-and-the-role-of-narrative-in-modern- games.

Want an essay on the same topic?
Order an essay from our professional writers and get an essay written from scratch in just 3 hours. We work only with the best academic writers.
Place an order
Related Topics
Computer Science
Computer Games
Narratives In Video Games
Video Games

The author, Helen Epstein, is a widely traveled scholar who has been keen to closely interview her target group. In her article, AIDS, Inc., she presents the various actions taken by different groups towards the AIDS pandemic. She seemed to be particularly concerned with the transmissions of HIV and the consequent effects on the social lives of ... END_OF_DOCUMENT_TOKEN_TO_BE_REPLACED
Pages: 6       Words: 1548
View Sample

Reasons Why I Should Join the Think Tank Team

There are various ways depicting relevance between sociology and social health, from the concepts of social environment and the effects to human health to lifestyle factors in disease in human health. Many people always consider health as a mainstream subject of science and medicine. Consequently, most of the disease etiology is often linked to life ... END_OF_DOCUMENT_TOKEN_TO_BE_REPLACED
Pages: 4       Words: 1000
View Sample

Abstract The field of human service is broad, but the key objective is exclusively tackling people’s needs through an interdisciplinary knowledge base while at the same time focusing on preventing and offering remedies to problems and developing a strong commitment to enhancing the general life quality of service population. Besides, the human service field promotes ... END_OF_DOCUMENT_TOKEN_TO_BE_REPLACED
Pages: 16       Words: 4314
View Sample

Massage Therapy and Quality of Life in Osteoarthritis of the Knee

Massage therapy has a direct association with the quality of life. Previous studies show that people with regular access to massage are likely to have positive moods and a healthy mental and emotional status. Besides, some studies reveal that older adults who receive periodic massage therapies have fewer body pains, hence a high-quality life. Nevertheless, ... END_OF_DOCUMENT_TOKEN_TO_BE_REPLACED
Pages: 4       Words: 1096
View Sample

Introduction Over the last decade, there has been and continues to be controversy about what constitutes a healthy diet. Saturated fats are at the center of this controversy as new perspectives challenge their role in causing cardiovascular disease. It’s approximately 41 years since the first dietary guidelines were issued to the American People and saturated ... END_OF_DOCUMENT_TOKEN_TO_BE_REPLACED
Pages: 11       Words: 2904
View Sample

The United States has been facing the problem of drug and substance abuse for decades. Heroin is among the most prominent drugs, and its use has been steadily rising since 2007, especially among young people aged between nineteen and twenty-five years. The number of US citizens using heroin for the first time was the highest ... END_OF_DOCUMENT_TOKEN_TO_BE_REPLACED
Pages: 3       Words: 691
View Sample
Need a plagiarism free essay written by an educator?
Order it today